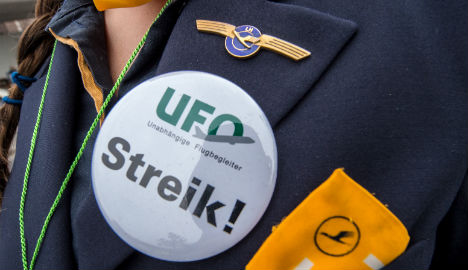 Lufthansa has yet to strike a deal with the UFO flight attendant's union. Photo: Boris Roessler/dpa
The accord gives a one-off payment of 2,250 euros ($2,350) and a 2.2 percent wage rise to ground staff and employees of IT subsidiary Lufthansa Systems, Lufthansa Service catering, Lufthansa Technik maintenance and Lufthansa Cargo freight service, the airline and Verdi said.
The collective bargaining accord runs to the end of 2017. Ground staff at several key airports in Germany had answered a Verdi half-day strike call in late March, causing hours of delays.
Lufthansa then said in September it intended to reach an agreement ending the dispute by the end of November.
But the carrier is still facing a battle with pilot and cabin staff unions as well as with Verdi over disputes over pay and retirement benefits which have led to several strikes in recent months.
Seven days of industrial action earlier this month, the longest strike in the company's history, saw some 4,600 flights cancelled, affecting more than half a million passengers.
Lufthansa is looking to slash costs in the face of competition from low-cost rivals and Gulf airlines.
Lufthansa said earlier this month it plans to hold a “jobs summit” on December 2 with flight attendants' union UFO, the Cockpit pilots' union and Verdi to hash out key problems in the long-running dispute.
UFO responded by saying it would hold off on strikes until at least after the jobs summit.