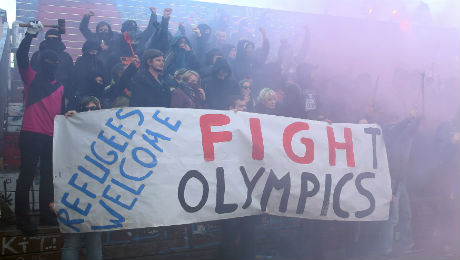 “We’re handing over the baton to the people of Hamburg and Kiel now,” said organising committee president Alfons Hörmann on Thursday.

If the bid were successful Kiel, a town on the Baltic coast, would also host some Olympic events including sailing.

“The outstanding vote participation shows that the Olympics Games project has arrived among the city’s people,” he added.

Up to this point 40 percent of the 1.3 million people who have a right to vote have handed their ballot paper in.

“In view of the current debate on international sport's governing bodies, Hamburg and Germany should prove that a clean, fair and sustainable application can lead to success,” he said.

He added that Germany should also prove that in the face of terror threats it can still host safe sporting events.

But there is an ongoing dispute running between Hamburg and the German government about who will foot what proportion of the bill.

“As far as financing goes, we’re having healthy discussions,” said de Maizière. “We’re talking about a lot of money, but in the end we’ll come to an agreement.”

Hörmann also expressed optimism that an agreement would be reached.

“I don't have the slightest doubt that we’ll succeed in finding a mutual and sensible solution,” he said.

For Hörmann, if over 50 percent of the Hamburg electorate vote for the games then he believes they have the democratic legitimacy to take part in the bidding process against Paris, Los Angeles, Budapest and Rome which will be decided in Lima, Peru, in 2017.

“Anything over 50 percent of the votes counts as democratic legitimacy to go further,” he said.

Hörmann warned that if Hamburgers were to vote no it could have damaging effects for professional sport in the whole of Germany.

A successful bid would “put badly needed wind in Sportdeutschland's sails,” he said.

“I’m not going to pretend that this valuable and important effect would not be missing [if Hamburg wasn’t successful]. Instead of wind in our sails we’d be fighting against the wind.”