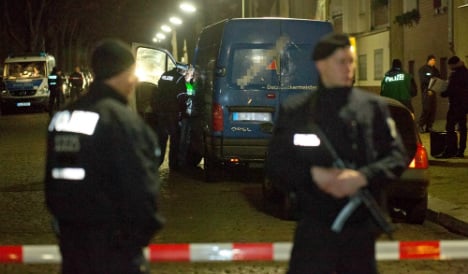 “Nothing dangerous” was found in a vehicle police searched in the Britz district south of the city centre, nor at the mosque in the western borough of Charlottenburg, a police spokeswoman said.

A 28-year-old and a 46-year-old believed to be connected to the Islamic fundamentalist scene had been arrested in the raid on Britz after their van was found to contain a suspicious package.

But no explosives or other dangerous items were found in the vehicle.

A third man from Tunisia arrested during the night was also freed, Der Tagesspiegel reported on Friday morning.

Security sources told the Berlin newspaper that there was no longer an urgent suspicion that the men were planning anything.

But investigators still believe there may have been plans for an attack in the city of Dortmund, North Rhine-Westphalia.

After no evidence was found at either of the locations they raided, they were forced to release the men.

Police in Dortmund said on Friday morning that they were “following the investigations in Berlin very attentively”.

“We are trying to get more concrete information. We take this very seriously and are in close contact with all the security authorities,” a spokesman said.