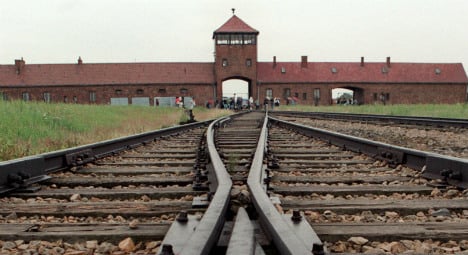 Rails run towards the entrance of the extermination camp at Auschwitz. Photo: DPA

The man in his late 20s was photographed several days ago at the Turm-Erlebniscity swimming pool in Oranienburg, north of Berlin, Der Tagesspiegel reported on Thursday.

Across his lower back was a huge tattoo of the death camp at Auschwitz and the motto “Jedem Das Seine” (to each what he deserves) which was emblazoned on the main entrance of the Buchenwald concentration camp.

“I just thought that this was scandalous, I told the lifeguard immediately,” journalist Alexander M., who took the photo, told Germany's Bild newspaper.

But the official just repeatedly said that he couldn't do anything about the Nazi message.

“What I thought was the worst was that none of the other swimmers took offence at the anti-Semitic tattoo,” Alexander said. The gate with the motto “Jedem das Seine” (to each what he deserves) at the entrance to Buchenwald concentration camp. Photo: DPA

It was only when he informed a second lifeguard that the swimmer was expelled from the pool – but the publicly-owned institution didn't report the man to the authorities.

Police and prosecutors only began an investigation after receiving calls about the incident from Bild and Berlin local newspaper BZ.

Prosecutors confirmed that the man could face criminal charges for the tattoo.

Anyone publicly showing symbols regarded as dangerous to democratic order in Germany – including Nazi symbols – can face criminal charges.

German neo-Nazis often cover up potentially criminal tattoos with tape or bandages while in public to protect themselves from prosecution.