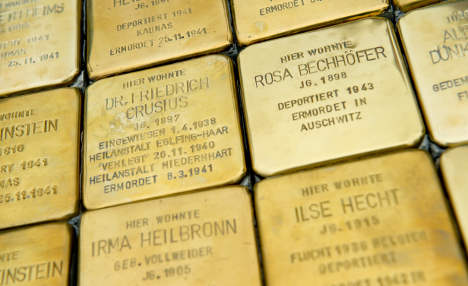 For the one side it is a desecration of the names of those sent to their deaths by the murderous Nazi regime. For the other it is the largest and most democratic commemorative project in the world.

The argument centres on Stolpersteine – stumbling stones – small bronze plaques set into the pavement in front of the last place of residence of people murdered in the Holocaust.

A familiar sight in Berlin since 1996, Stolpersteine can now be found in 1,000 German municipalities and in 20 different European countries.

Of the roughly 6 million victims of the Holocaust, 55,000 now have Stolpersteine as permanent markers of their murder.

But Munich stubbornly remains out of step. Not a single Stolperstein can be found on the southern city’s streets – despite the fact that at least 4,500 of the city's Jews died in the genocide.

Surprisingly, the reason why the Bavarian capital refuses to join in on the project comes from within the Jewish community itself.

Charlotte Knobloch, President of the Jewish Community of Munich and Upper Bavaria (IKG), is fiercely opposed to the cobblestone memorials.

The 82-year-old Knobloch is herself a Holocaust survivor and, writing to the city parliament in 2014, criticized the Stolpersteine as “dishonorable and impious.”

Memorials to the Holocaust should never be placed on the ground, Knobloch argued, because they remind survivors of the dead and injured Jews who lay on the floor of concentration camps and the ruthless German soldiers who would step on them.

'Essential part of the culture of remembrance'

But this reasoning has been angrily rejected by other Munich Jews and relatives of Nazi victims who are now bringing a lawsuit against the city to try and change the policy.

The lawsuit was announced on Wednesday, 74 years to the day after 1,000 Munich Jews were murdered in the Lithuanian town of Kaunas.

Peter Jordan, a member of the group taking legal action, lost his parents Siegfried and Paula on that day. He describes Stolpersteine as “an essential part of the post-war culture of remembrance.”

While Munich has come up with alternative ways of remembering the individual victims of the Holocaust, including wall plaques and Stelen (columns), for Jordan and others these are insufficient.

“People who own the buildings and the families of victims are unwilling to take on liability for wall plaques in the case of them being damaged,” Terry Swartzberg, an American Jew who is now a resident of Munich and a leading light of the campaign in favour of Stolpersteine, explained to The Local.

If they can't agree on a wall plaque with the building owners, current city regulations allow victims' families to set up Stelen outside, Swartzberg says.

But he argues that on Munich's crowded streets they would get in the way of cyclists and pedestrians or they would be used by dogs as a spot to pee on, and would thus be desecrated.

“1,000 other communities in Germany looked at Stolpersteine before approving them and said they were in accordance with regulations for public space and the German Constitution,” says Swartzberg, a journalist who has lived in Germany for four decades.

“Munich agreed that all forms of decentralized commemoration are permissible but not Stolpersteine. We say this distinction can’t be made.”

Besides, he says, Munich has ground level memorials for many victims of persecution, including for Kurt Eisner, the Jewish Minister President of Bavaria who was murdered by the far right  in 1919 – so why not for victims of the Holocaust?

As well as being backed by the liberal Beth Shalom Jewish organization, Stolpersteine also have the support of other Nazi victims, namely LGBTI, Sinti and Roman groups, Swartzberg says.

The IKG refused to comment on the lawsuit, pointing only to a decision taken by the city parliament taken in December 2014 to uphold the ban as proof of its democratic legitimacy.

But Swartzberg describes this vote as “a farce”, implying that the IKG bullied the parliament into taking the decision.

The IKG was the only Jewish group allowed to speak at the hearing, he says. And instead of Knobloch turning up in person, she sent “an abusive lady” to put her point of view forward instead.

The parliamentarians went against the views publicly expressed by their own parties in upholding the ban, he added.

“Frau Knobloch is entitled to her point of view. But she is forcing it upon every one else. What is essentially happening is that everyone else’s feelings are being disregarded so that hers can be upheld,” Swartzberg said.