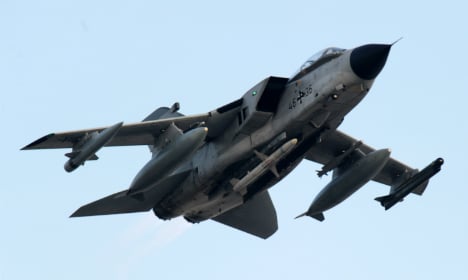 A Bundeswehr (German army) Tornado aircraft taking off from the Jagel airbase in Schleswig-Holstein in 2013. Photo: DPA

“We won't just strengthen the training mission [for Kurdish Peshmerga fighters] in northern Iraq, but also push forward our engagement in the battle against Isis terror in Syria with reconnaissance Tornados,” Otte said.

Intelligence from German spy satellites could also be passed on to France, while German frigates could escort friendly ships at sea.

“If the President of France asks me to consider how we can do more, then it's up to us to think about it,” Merkel had told journalists after meeting with Francois Hollande.

The Chancellor also laid a pink rose at the Place de la Republique, close to the Bataclan concert hall and other sites attacked by terrorists on the night of November 13th.

“We will react very fast… [Isis] must be fought with military means,” she said. “We will be stronger than the terror.”

“If Germany can go further, that would be a very good signal,” Hollande told journalists at the leaders' joint press conference at the Elysee Palace.

France has invoked a clause in the Lisbon Treaty requiring EU member states to provide military assistance after the November 13 attacks, in which Islamist gunmen and suicide bombers killed 130 people in the French capital. Angela Merkel and Francois Hollande lay flowers at the base of the Marianne statue on the Place de la Republique. Photo: DPA

But Merkel's promise marks a big change from just a few days ago, when her junior coalition partner, the Social Democratic Party (SPD) told The Local Hollande's request for aid from EU partners was only 'symbolic'.

But Germany has shown increasing willingness to help France more directly since then, with Defence Minister Ursula von der Leyen promising 650 troops to the UN peacekeeping mission in Mali to free up French soldiers.

More soldiers from the Bundeswehr (German army) will also join 100 men already on the ground in northern Iraq, where they are training Kurdish Peshmerga fighters to use tens of millions of euros' worth of German-supplied weapons.

Hollande will now head to Moscow on Thursday to press his case for an anti-IS alliance to President Vladimir Putin, after receiving few firm commitments from President Barack Obama in Washington.

Meanwhile in Britain, Prime Minister Cameron will on Thursday set out the case for his country to extend its air strikes against IS from Iraq into Syria ahead of a vote by MPs next week.

The British premier has called IS a “direct threat to our security at home and abroad” and on Monday offered to let France use the RAF Akrotiri air base in Cyprus when flying missions against the jihadists.