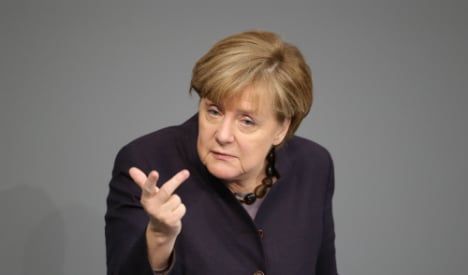 “The number of refugees coming to us must be reduced,” Merkel said at the Bundestag (German parliament) debate on the 2016 budget.

While the Chancellor acknowledged that “simply walling ourselves off won't solve the problem,” she said that Germany would have to continue its policy of deporting those whose asylum applications fail.

That included anyone applying for asylum from “safe countries of origin” such as the western Balkan nations.

In a voice sounding hoarse from a winter cold but animated with a dose of rarely-seen emotion, Merkel tried to balance throwing a few bones to those on the right of her Christian Social Union (CDU) and their conservative Bavarian allies with sticking to her principles.

She said that asylum policy would have to change now that the number of applications has ballooned to close to one million in a single year.

Europe would have to agree on legally-binding quotas for the number of refugees each country should accept, she said.

And in response to Germany's European Commissioner Günther Oettinger, who warned that too-generous policies were attracting large numbers of people, the Chancellor said she was reducing so-called 'pull factors', including cash handouts to asylum seekers.

Merkel also repeated that the country's strong economy – and her government's good financial management – meant that MPs could vote for a balanced budget for 2016 with confidence that she would stick to it despite the extra spending on refugees.

Refugees will go home one day

Merkel made a point of noting that “if there were to be peace in Syria one day, then many of those who have permission to stay here under the Geneva Convention on Refugees would go home”.

“I also argue that we shouldn't try and convince them not to do that,” she said. “The idea that one can only live well in Germany is not shared by seven billion citizens of the world.”

But she insisted that Germany ought to be “proud” of its integration and language courses for refugees and the pipeline to get them working in German firms.

“What people learn here can be used in any life – whether here with us or in Syria, too,” Merkel said.

Merkel tried to leave MPs on a positive note by praising the French-German co-operation that had gone into organizing next week's COP 21 climate conference in Paris.

“I hope that this conference will be a success, it can be a wonderful signal against terror, against war, against the reasons that force people to flee,” she said.

In typical “Mutti” style, she repeated her famous statement of intent that “we can manage this” – although this time she enlarged it to the global challenges Germany and Europe face.

This time, too, there was a tail of conditionality added to what has become her motto in recent months – managing the world's various crises “will take a lot of hard work, and a high level of new thinking”.

Weak applause from among her own ranks in the Bundestag suggests that Merkel may have some way to go to convince her foot soldiers to take on the work or to change their way of thinking.