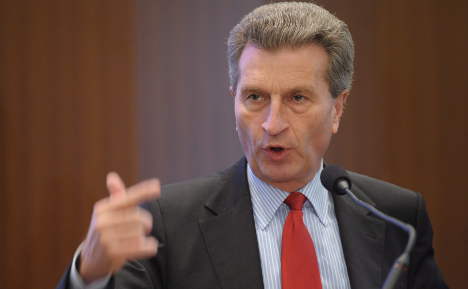 “The German asylum law acts like a magnet for refugees,” Oettinger told Handelsblatt.

In the long term, the numbers will only cool down when there is less incentive to come, he said.

“Changing the constitution would be necessary in order to establish new rules on asylum,” said the commissioner. “As long as this isn’t done, there is only one other alternative – aid to the tune of millions to Turkey and other states.”

The European Union itself can “only in a limited manner participate in financing” the refugee help, said Oettinger, explaining that the EU's budget doesn't allow for more.

In order to better direct the migration into Europe, the commissioner for digital economy recommended better security at Europe's borders.

“We need a capable border control authority in Europe,” he said. “We need 5,000 border officers instead of 500.”

The refugee crisis is set to be discussed in the Bundestag (German parliament) on Wednesday as part of the budget debate. Eagerly awaited will be Chancellor Angela Merkel’s speech after a humiliating appearance at the conference of the southern Christian Social Union (CSU), where Bavarian Minister President Horst Seehofer publicly dressed her down for her refugee stance.

Seehofer, whose CSU is a junior member in the coalition government, is demanding an upper limit be set on the number of refugees Germany is prepared to accept, a proposal which Merkel rejects.

Members of the centre-left Social Democratic Party (SPD) are now also calling for “breathing space” as thousands more refugees continue to enter the country on a daily basis.

Families Minister Manuela Schwesig (SPD) told the Passauer Neue Presse that “we can’t keep taking people in at the rate we have been doing in the past few months”.

Arguing that the country is reaching its practical capacities to house and feed more people, she said “it’s important that we get a bit of breathing space”.

Police figures released on Monday showed that Germany has already taken in 180,000 refugee in November and is set breach the 1 million mark this week for the amount it has taken overall in 2015.