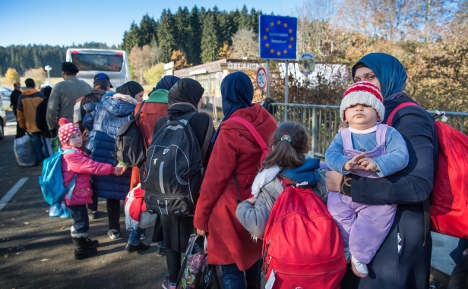 Every day they keep coming by their thousands. On Saturday 7,120 migrants crossed into the Bundesrepublik. On Sunday it was a further 7,362, Die Welt reported .

The vast majority of these newcomers are setting foot in Bavaria after crossing the Austrian border.

This constant flow means that the total number of refugee arrivals in November had reached 180,000 by the end of the weekend, according to numbers from the Federal Police, with over a week of the month left.

In October 181,000 people were registered at the German border seeking asylum, meaning November will certainly set a new record.

The stubbornly high number of new arrivals also means that the government’s forecast that 800,000 refugees will arrive in the whole of 2015 is set to be clearly overstepped.

By the end of October 758,500 refugees had already been registered, raising the probability that by the year’s end more than a million people will have sought refugee in Germany from poverty and war.

Meanwhile the Ministry for Families announced on Monday that it would create 10,000 new places in the Federal Volunteer Service at a cost of €50 million, an increase of almost one-third on the existing 35,000 places.

The new helpers will support the volunteers currently shouldering much of the work of getting refugees through their arrival in Germany.

And for the first time, refugees already in Germany will be able to join to help the new arrivals, Families Minister Manuela Schwesig said.

“Given the arrival of many refugees threatened by war and terror in our country, it's important that we energetically support refugees to integrate into our society,” she added.

The Federal Volunteer Service organizes volunteers for a year of work which more usually includes nature protection, caring for the elderly or working with young people.

They receive an allowance of up to €363 per month and have their income topped-up from social security.