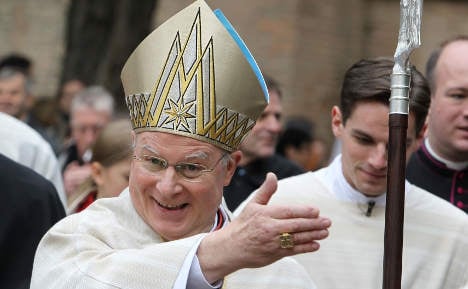 “I’m somewhat appalled to see the conditions I find here,” said Bishop Konrad Zdarsa, after visiting a refugee home in an old military barracks in the south Bavarian town.

According to the Süddeutsche Zeitung (SZ) the refugee home is considered the worst in the whole of Germany and, before the autumn when hundreds of thousands of migrants began to pour into the country, was slated for closure.

Now 100 men from 20 different countries are housed in the red-brick building, but paint is still peeling from the walls and broken window panes have been blocked up with plywood.

But, while the bishop’s words might seem like an act of Christian solidarity, his actions tell a different story, the SZ writes.

Just days after his public dressing-down of state authorities for conditions in the refugee home, Zdarsa announced that the Augsburg Cathedral would be given an extravagant new €300,000 altar.

The decision has caused controversy within the diocese, with complaints aired over the cost of the project and questions raised over its necessity.

The current altar is itself only 20 years old and the decision to replace it seems to be motivated mainly by the fact it does not conform to the bishop’s tastes.

At a community meeting to discuss the proposal, Michael Schmid, head of the Cathedral’s Arts department made clear that the bishop wants an altar that has a clear understandable visual message, reports the Augsburger Allgemeine.

The current altar sends out a lot of messages, said Schmid, “perhaps too many.”

The costing for the new altar has already been reduced from €500,000 after outcry as to the expenses. The church as apparently now made the sacrifice of sourcing its marble more locally to save pennies.

Reacting to accusations of profligacy at the church meeting, Schmid said “would it be better if we left the old altar standing there for another five or ten years?”

According to the Augsburg diocese budget for 2015 it is set to take in an income of €310.8 million over the year.

Slightly over €25 million of this has been spent on social projects and the Charitas charity. Meanwhile €9 million is to hand for the costs of maintaining church properties.

“The diocese has set aside €4,417,000 for work with refugees in the 2015/16 budget, as well as €800,000 for social counselling of asylum seekers through Charitas,” Dr, Karl Georg Michel, head of communications at the diocese, told The Local.

“In order to support our engagement with refugees and to build up and connect the work of the countless volunteers we have, since October we also employ our own commissioner for refugees,” he added.

The SZ finishes its report with the biting observation that one good outcome of the scandal is that the bishop has decisively disproved allegations that Germany is on the point of reaching the limits of its ability to help refugees.