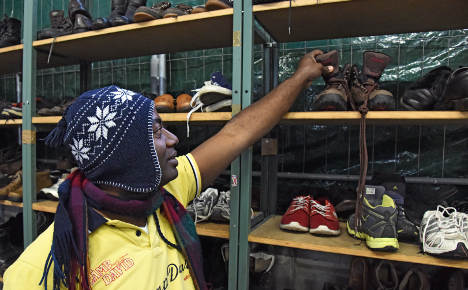 The study released by the environmental NGO on Monday reveals that Germans have around 5.2 billion items of clothing in their wardrobes.

But 40 percent of that number – 2.08 billion pieces of clothing – are rarely or never used.

A total of 64 percent of those surveyed admitted that they would stop wearing a piece of clothing because they had changed their taste in fashion.

Almost a third meanwhile said that they would get rid of a piece of clothing to make room in their wardrobe for new clothes.

Greenpeace claim that most of the clothes which are not wanted any more end up in the bin, pointing to a result of the survey which showed that almost half of respondents admitted to throwing out clothes within the last six months.

Fashion has become something we chuck away, like paper cutlery, complains Greenpeace expert Kirsten Brodde.

“This puts a strain on the environment and our health, because clothes are made with hundreds of poisonous chemicals,” said Brodde.

The culture of repairing old clothes seems to be dying out in the Bundesrepublik, the survey showed.

One in every eight Germans wears a pair of shoes for less than a year before throwing them away.

The idea of having shoes repaired was particularly alien to respondents between 16 and 39, only one in ten of whom had recently taken a pair of shoes to a cobbler, while half had also never been to a shoemaker.

Half of those surveyed admitted to never having taken an item of clothing to a tailor.

Donations not the problem

The study, which involved interviews with over a thousand people between the ages of 16 and 69, showed that women are considerably more decadent than men when it comes to the contents of their closets.

The average German women owns 118 items of clothing – and that’s not even including underwear. Men by contrast own an average of 73 pieces of clothing.

West German women own the most clothes, while the survey also found a clear correlation between education and wealth on the one hand and the quantity of clothes you have on the other.

The survey also revealed a gap between the principles and practice of German consumers. While one in every two respondents said that the labelling of products as sustainable, environmental and fairly produced is very helpful, only one in four paid attention to such labelling when actually buying their clothes.

But according to press agency AFP donation of clothes to charities is something Germans get right, giving far more each year than charities can usefully use.

Markus Böck, spokesman for the German Clothing Foundation, told The Local that “not all Germans act in the wrong way. Many don’t simply throw their old clothes away, but donate to charities such as the German Red Cross or our own charity.”

Böck explained that even if old clothes are no longer useful as clothes there are many other things they can be turned into such as insulating materials and cleaning products, adding that “they should be treated as a raw material like glass, paper or packaging.”

Greenpeace also focused on waste of the resources that went into making clothes, claiming that to make one pair of jeans requires over 7,000 litres of water.

“To stem this overuse of clothes, the easy alternatives of sharing and exchanging must become parts of everyday life, like brushing your teeth,” says Brodde.

“There are plenty of alternatives, whether it be an exchange site on the internet, a flea market or a clothes swapping party round the corner.”