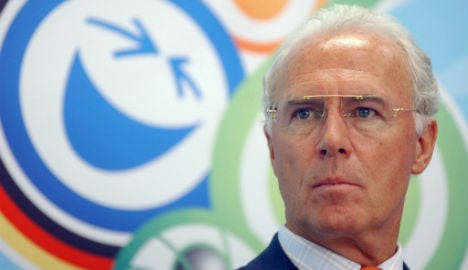 Franz Beckenbauer at a press conference during Germany's 2006 World Cup bid. Photo: Walter Bieri/dpa
In the interview published in Saturday's Suddeutsche Zeitung, however, Beckenbauer admitted that he had often signed documents without reading them.
Spiegel magazine last month alleged that the votes of four members of FIFA's executive committee were bought in 2000, when Germany narrowly won the vote to host the 2006 finals.
At the centre of the scandal is a 6.7 million-euro ($7.2m) payment, which is alleged to have been used to purchase the support of FIFA's executive committee.
But in an interview to appear in Saturday's Suddeutsche Zeitung, Beckenbauer, who led the successful bid to stage the tournament and later served as chairman of the organising committee, insisted there was no
wrongdoing.
At the heart of the scandal is a draft agreement, signed in part by Beckenbauer, which reportedly offered a lucrative friendly against Germany, but no cash.
It was made with disgraced former CONCACAF president Jack Warner — who is banned for life by FIFA — but it remains unclear whether it was ever used.
“Of course, when we went somewhere before the awarding of the tournament, it was clearly not for coffee but to win the vote. We wanted to show the value  of our bid,” added Beckenbauer in the interview.
Beckenbauer admitted that he often signed papers without reading them entirely as he preferred to trust people he was dealing with.
“I have always signed easily, without looking,” said Beckenbauer. “Ask Karl Hopfner about my 15 years as president at Bayern Munich. He was in charge of finance. You will not believe that I had not read a single
document. You do not believe and yet it was. When I trust someone, I sign, without looking.”
Url copied to clipboard!