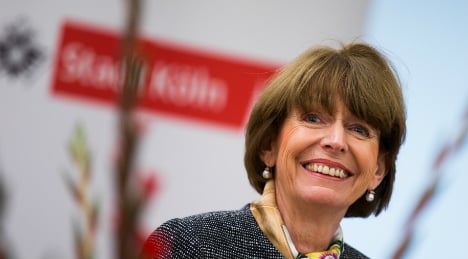 Reker during her speech on Friday. Photo: DPA

“There is not one conviction or view that I will retreat from after this violence that I've lived through,” Reker said as she took office at the North Rhine-Westphalia cathedral city's town hall.

She added that she had been very lucky to survive the knife attack and reserved harsh words for far-right violence and hate speech.

“Violence and hate betray themselves. They are no solution,” Reker said.

While she was unconscious, she won the mayoral election in the first round with 52.7 percent of the vote.

Friday was her first public appearance since the attack in mid-October on the final day of campaigning before the mayoral vote.

As head of social services in the city, Reker's job had previously involved working closely with refugees and other people in need.

Her 44-year-old attacker faces a charge of attempted murder.

His attack was “the current high point of a whole series of intimidations and threats” against those all over Germany who have chosen to help refugees, prosecutors said as they announced the charges.

They had previously said that the attacker had specifically chosen Reker as his target so as to create “a climate of fear” among those volunteering to help refugees.

North Rhine-Westphalia security officials reported that the man had been linked to the far-right extremist scene in the state for years.

He was linked to the aggressive neo-Nazi “Free German Workers' Party” (FAP) in the 1990s until it was banned in 1995.