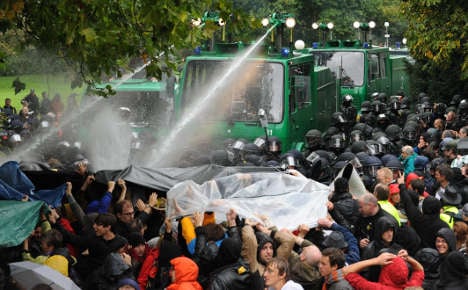 The administrative court in the Baden-Württemberg state capital cleared the way for seven plaintiffs to receive financial compensation from the city's police.

Judges found on Wednesday that law enforcement had overstepped their legal boundaries when they violently broke up a protest in September 2010, reports the Süddeutsche Zeitung.

Riot cops moved in to break up a demo at the Schlossgarten park in central Stuttgart, where trees were to be felled as part of the “Stuttgart 21” project to renovate the main train station.

One man, 66-year-old Dietrich Wagner bled from his eyes after being struck in the face by the spray from a water cannon and was left partially blind.

Wagner was among the seven plaintiffs in court on Tuesday.

The judge ruled that while police are entitled to go after specific people breaching the law, they cannot break up an entire protest using  water cannons, batons and pepper spray.

Stuttgart 21 is highly controversial – especially among environmental movements – due to the costs involved in relocating the central station underground and the environmental impact on the adjacent Schlossgarten.

Current estimates put the cost of the project at €6.5 billion with a completion date pencilled in for 2021.