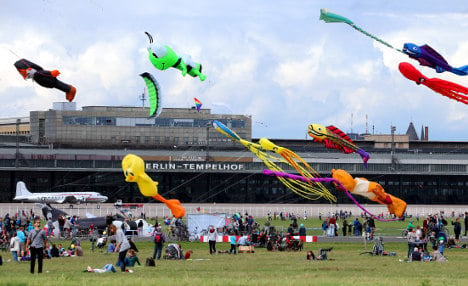 The former airfield was used for the 2015 European "Festival der Riesendrachen" (Festival of Kites). Photo: DPA

In September, Berlin's former Tempelhof Airport made headlines after becoming a shelter for hundreds of people seeking refuge in the city.

But a new initiative to increase its capacity to house refugees could run into legal issues.

On Tuesday, the Berlin senate announced plans to erect tents and air-domes on parts of the airport's protected grounds, reports Berliner Morgenpost.

The plans come less than two years after Berliners voted to keep all 380 hectares of Tempelhofer Feld free from development in a citywide referendum.

The new accommodation would not be permanent, planners have stressed – but even so, the move has sparked criticism from the Green Party.

“Accommodating so many people in one place would be difficult to organise,” Green Party chairperson Antje Kapek said. There is already a substantial lack of resources, she added – suggesting that the senate should look at alternative options.

In May 2014, a public referendum saw Berliners vote to protect Tempelhofer Feld from development, after government plans to give parts of the former airport over to property developers sparked outrage. For tents and air-domes to be erected, the government would have to make an exception to this law – something which public campaign “100 per cent Tempelhof” find worrying.

“The government is using this emergency situation to soften the law on the Tempelhof airfield,” spokesperson Felix Herzog told Deutsche Welle in early November, when plans for the new accommodation were first made public.

But senate spokesperson Bernhard Schodrowski stressed that none of the new constructions would be permanent.

“We want to prevent homelessness among refugees,” he told DW. “So we want to make legal preparations for temporary buildings.”

Since the airport's closure in 2008, Tempelhofer Feld has been transformed into a public recreation ground, hosting concerts, festivals and other public events.

The former airport was also used as a set in the latest Hunger Games films.

Tempelhof's original terminal was built in 1927 and was reconstructed by the Nazis in the 1930s.

During the Berlin Blockade in 1948-9 the airport played a key role in the Allied Forces' famed Berlin Airlift – which saw over 2.3 million tonnes of food and fuel delivered into West Berlin, blocked off from the rest of Germany by Soviet troops.