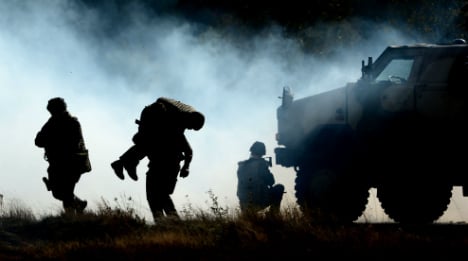 Soldiers from the Bundeswehr (German army) on exercise in 2014. Photo: DPA

“It goes without saying that we will do everything in our power to provide help and support,” von der Leyen said before an EU defence ministers' meeting in Brussels.

“We will listen very exactly to what France has to say and also analyse carefully what France is asking for.”

But the German defence minister stopped short of pledging military support to its Gallic neighbour.

“Strategy will have to be thought through, things will have to be done differently,” in the fight against Isis, MP and Social Democratic Party (SPD) defence spokesman Rainer Arnold told The Local.

He added that Germany might send more military aid to northern Iraq, where troops from the Bundeswehr (German army) are training Kurdish Peshmerga fighters to use German-made weapons in the fight against Isis.

But the decision to call for military aid under the EU treaties was more “symbolic and political,” than “concrete”, Arnold said, and would likely not see German fighter aircraft or ground troops sent overseas.

“We must have understanding for France as a society in mourning, but react sensibly,” he said.

“I have the impression that President Hollande knows that too.”

At the meeting, French defence minister Jean-Yves Le Drian invoked article 42-7 in the EU's Lisbon Treaty, which provides for the solidarity of member states in the event of an attack on one of them.

His appeal came after Friday's bloodshed in Paris – in which Syria-based terrorist group Isis carried out one of the worst ever terror attacks on French soil.

It is the first time that a European Union member state has invoked the article, which is similar to NATO's article five which the United States activated after the September 11, 2001 attacks and triggered the alliance's intervention in Afghanistan. European foreign policy chief Federica Mogherini announced on Tuesday morning that ministers had agreed to support France, which has intensified bombing raids against the terror group's stronghold in Syria and Iraq.

“Today the EU through the voices of all the member states unanimously expressed its strongest full support and readiness to give the assistance needed,” she told a press conference in Brussels with  Le Drian.

“France will be in contact bilaterally in coming hours and days to express the support it requires and the EU will ensure the greatest effectiveness in our common response,” former Italian foreign minister Mogherini added.

Support from across the EU

Other EU countries including Sweden have already pledged their support.

The French minister said the EU's support was a “political act of great significance”.

Le Drian said it would “allow us in the hours to come to have bilateral talks where necessary” with other EU states to establish what aid France needed.

This aid could either be in support of France's Syria airstrikes but also in other theatres, adding that France “can't be everywhere at the same time.”

There was speculation on Tuesday that France might ask for help in Mali and the Central African Republic, where its troops intervened in 2014, to free up forces for the fight against Isis.

“I felt a lot of emotion from my colleagues” over the Paris attacks claimed by the Islamic State group which left 129 people dead, Le Drian said, adding that many of his counterparts had addressed him personally in French to pay their respects.