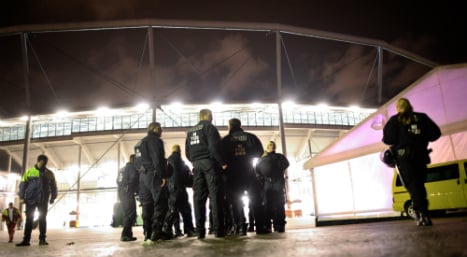 Police outside the stadium in Hanover on Tuesday night. Photo: DPA
KEY POINTS
• German-Dutch game cancelled over security scare.
• Game cancelled because of ‘large number of tips’ – German interior minister De Maizière.
• Danger for Germany and Europe is high, Interior Minister says.
• Police to remain on duty overnight.
• De Maziere: “We will not change our way of life”.
• Reports of ambulance packed with explosives played down.
• German team was four kilometres from stadium.
• Suspected bombs at the train station have been made safe.
A bomb threat caused officials to call off the football match on Tuesday meant to honour victims of the Paris attacks, which was to be attended by Chancellor Angela Merkel and about half her cabinet.

Interior Thomas Minister de Maizière said at a press conference on Tuesday night in regard to the threat that “clues about today's football match became so numerous early this evening” that the federal security authorities and himself decided to cancel the game.

“The danger for Germany and Europe is high, the situation is serious. I've been saying it for a long time, and have repeated it since the Paris attacks,” he said, adding that the information had been vetted “thoroughly”.

Despite media reports that an ambulance or vehicle had been found containing explosives, Lower Saxony's interior minister Boris Pistorius could not confirm that any explosives had been found, or that any such vehicle was found near the stadium.

He and De Maizière also said that no arrests had been made.
Federal police told Norddeutsche Rundfunk that a suspected bomb on an InterCity service at the main train station had been made safe, and was in fact only a dummy.

“We won't change our way of life'
De Maiziere said he didn't want Germans to be forced by terrorism to change their way of life, but that this time he had no choice but to cancel the game.
“We want to go to the Bundesliga, theatre, Christmas markets, public festivals. But sometimes we have to find a different way to protect people in one-off cases,” he added.
“It's clear after tonight that in principle, we will continue to hold events like this with care and sometimes a bit of courage.”
Stadium evacuated

Police announced at 7.20pm that the match in Hanover would not go ahead due to “security reasons” and asked thousands of fans to calmly leave the stadium.

Police told the crowd on megaphones: “Ladies and gentlemen, dear football fans. We're sorry, but the match has been cancelled at short notice. Please stay calm, there is no imminent danger. Just please simply go home.”
Police also advised people to avoid public transport and were checking cars, leading to lengthy traffic jams bathed in the blue light of flashing police sirens.
Hanover’s police chief Volker Kluwe had told Bild earlier in the evening there was a “concrete danger for the whole of Hanover – there was a serious plan to explode something”.

Kluwe had also told broadcaster NDR that the threat was reportedly to be within the stadium.

“The plan was to blow up a bomb in the stadium,” Kluwe said. “We received the decisive piece of information 15 minutes after the stadium doors were opened.”

Merkel had not yet arrived at the stadium and was reported as safe by officials. The German national team was also reported to be safe as they were four kilometres away from the stadium when the decision was made to cancel the game and they were diverted to a safe location, according to Pistorius.

It was to be Germany’s first match after a national friendly in Paris on Friday when suicide attacks outside the Stade de France left three people dead.

German national team trainers had wanted the match against the Netherlands to go ahead as a mark of respect for the victims of the terrorists attacks in Paris which left 129 people dead.

The DFB had at the weekend already come close to calling off the match, while Belgium cancelled their friendly against Spain on Tuesday.
The German team are still coming to terms with what they experienced last Friday.
After the Paris blasts, the Germans spent the night in the Stade de France changing room, as it was considered too dangerous for them to cross Paris.
They flew home early the next morning.
Suspicious package
An hour before the cancellation, police had already cordoned off an area in front of the stadium due to the discovery of a suspicious object, but gave the all clear shortly afterwards.

“Security always comes first,” Hanover mayor Stefan Schostok told the Sports News Service (SID). “It’s a fear one always has and I trust the police to have made the right decision.”

Der Spiegel also reported transit restrictions on the U-Bahn at the request of police.