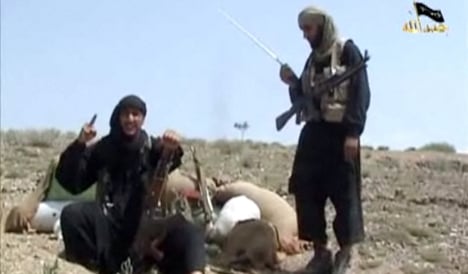 A screenshot of German jihadists in Pakistan. Photo: DPA.

According to the most recent report on internal security published in June, Isis with its base in northern Syria and western Iraq, has “developed as an important port of call for those in Germany willing to commit jihad”.

“Willing German jihadists obtain terrorist techniques there and the chance to practise them in real world scenarios,” the report by the internal intelligence service (VS) claims.

“Within this group there are increasing indications of an inclination to brutality and the normalization of violence. Several jihadists from Germany have already carried out suicide attacks,” the reports warns.

About one-third of those who have gone to fight in Syria have since returned to Germany, the VS believe.

But the security report states that there has been no evidence of most of them being involved in “hostilities” once back in Germany.

In many cases it would seem the Isis recruits become disillusioned with the Islamist movement after travelling to Syria, as illustrated by the case of two young men who returned to Germany and faced trial for taking up arms in the jihadists' war.

Still, the VS report also notes that “those who graduated from a terrorist training camp or more specifically were active participants in combat pose a significant security risk when they return to Germany”.

Nearly 44,000 people across 25 different groups within Germany are considered Islamists or potential Islamist terrorists, the document continues – an increase of 700 people between 2013 and 2014.

But this figure does not include affiliates of Isis or al-Qaeda, as the report states that no “definite” number is known for these two groups.

That Germany is a possible home for jihadist terrorists first became clear in 2001, when an al-Qaeda cell based in Hamburg were found to be responsible for plotting and carrying out the 9/11 attacks in New York and Washington.

But the Bundesrepublik is still to suffer a major Islamist terrorist attack within its borders, making it unique among major western powers.

The first and so far only Islamist-motivated terrorist attack in Germany happened in 2011 when an ethnic Albanian man from Kosovo shot and killed two US airmen and wounded two others at Frankfurt Airport.

The shooter insisted he had acted alone, though investigators found evidence that he had had links to Islamist groups in Germany.

In 2007, the members of the Sauerland Group – an Islamist organization with connections to the militant Pakistani organization the Islamic Jihad Union – were arrested for reportedly plotting to bomb targets in Germany.

Two members of the group were sentenced to 12 years in jail in 2010. The third received an 11-year sentence.

Meanwhile a cell with connections to al-Qaeda in Düsseldorf was arrested in 2011 for plans to stage a major bomb attack.

The group's 33-year-old Moroccan ring leader was handed a nine year jail term in 2014, with the other members receiving upwards of five years behind bars.

Several court cases point to the connection between Isis and German Islamist movements.

Over the past year German courts have dealt with several cases including a group that reportedly stole from churches to fund Isis.

Meanwhile German jihadists based in Syria have issued threats against their home country. One told MP-turned-journalist Jürgen Todenhöfer in January that Isis aims to “conquer Europe”.

One of the more high-profile Germans to leave for Syria was rapper turned jihadist, Deso Dogg, who was killed last month in a US air strike. He and others have made menacing videos, including ones that directly threaten Germany.

“Isis terrorism is a global challenge that is heading towards Germany,” head of the Conference of State Interior Ministers Roger Lewentz told Die Welt on Monday. “We have good police, but the German population must know that the threat exists.”

Terrorism traditionally from the right and left

Historically, since the end of the Second World War, Germany’s main terrorism concerns have been far-left and far-right groups, as well as some foreign nationalist groups.

One of the most lethal attacks in recent German history was the 1980 Oktoberfest attack in which a neo-Nazi planted a bomb at the beer festival, killing 12 others and injuring more than 200.

Another infamous attack was committed by the Palestinian nationalist group, Black September, when members of the group stormed the 1972 Summer Olympics in Munich. The group took hostages and 11 members of the Israeli Olympic team died, as well as one German police officer.

The far-left Red Army Faction (RAF) was responsible for a number of attacks in West Germany between 1970 and 1998 that resulted in more than 30 deaths.

An injured member of the West German embassy in Stockholm is carried away after an attack by the RAF in 1975. Photo: DPA.