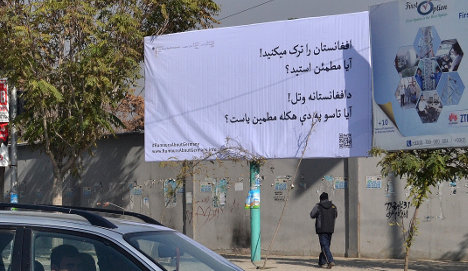 A poster in Kabul, reading: "Leaving Afghanistan? Are you sure?" Photo: DPA.

“This is not about deterrence, but about getting people to think it through,” said a foreign ministry spokesman.

The foreign ministry has also turned to social media, including Facebook and Twitter, to send the message to Afghans, including by explaining the dangers of putting their lives in the hands of human traffickers.

Germany also stressed that it was continuing to help stabilize Afghanistan and that it was therefore “crucial that Afghans themselves don't turn their backs on their homeland, but stay and build the future of their country together with us”.

Alarmed by the high numbers of Afghans who are seeking asylum in Germany, Interior Minister Thomas de Maiziere had come out in late October to urge young citizens of the South Asian nation to stay home and rebuild their homeland.

“There is an increasing number of citizens from the middle class, also from Kabul, and we are in agreement with the Afghan government that young Afghans from middle class families should stay in their country and rebuild it,” said De Maiziere.

He acknowledged that there remain security concerns in Afghanistan, and that the country could not qualify as a “safe origin” country – a category which would have led to blanket refusals of asylum requests.

Between January and October, some 758,473 people filed requests for asylum in Germany, including 67,191 Afghans – making them the third largest group of applicants, after Syrians and Albanians, for the period.