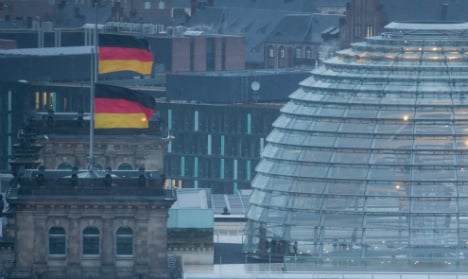 Flags at half mast over the Reichstag building in Berlin, home of the Bundestag (German parliament). Photo: DPA

Germans fell silent for a minute at midday as the country remembered the 129 victims of the violence in France over the weekend, including at least one German in his late 20s.

French ambassador Philippe Etienne joined members of the public in Berlin's Pariser Platz, in front of the French embassy and the Brandenburg Gate, for the memorial.

The Local spoke to Hans, one of those laying flowers in Pariser Platz just after midday.

“I'm here because I oppose terror,” he said – adding that he has no close connection to Paris, but still wanted to come and show his support.

Flowers line the ground in front of the French embassy and Brandenburg Gate on Monday. Photo: Hannah Butler

Doris Petrich was another member of the public laying floral tributes.

“I'm here because I'm horrified by what has happened,” she told The Local, “and I wanted to show my sympathy.”

Alongside officials, press and members of the public, one Muslim protest group also showed solidarity with mourners. The National Council of the Resistance of Iran (NWRI) was founded in 1981 as a movement against Iran's theocratic state.

Javad Dabiran, from the NWRI foreign committee, told The Local: “We see it as our human responsibility to come here today – as Iranians, Muslims, and people who have suffered under Islamic fundamentalism in Iran for years.

“It's especially important in moments like these, when terrorists try to abuse Islam, that tolerant Muslims also take a stand,” Dabiran said.

“These aren't Muslims,” Hans agreed when The Local spoke to him. “We have a mosque in Frankfurt, and over the entrance in big letters it says 'Love for all, hate for none.'”

Flowers, flags and other tributes cover the ground in front of the embassy. Photo: Hannah Butler

Petrich didn't think Berlin is at any more risk than any other German city.

“You could just as easily say that there's a possibility of something happening tomorrow in Hamburg,” she added.

Ordinary people across Germany joined many public workplaces, local leaders and even the Berlin S-Bahn in marking the minute of silence at 12 noon.

Münster mayor Markus Lewe with crowds outside the town hall during the minute's silence. Photo: DPA

Other countries around Europe also took part in the initative which was put forward by the European Union. Flags at half mast with black ribbons outside the temporary home of the Baden-Württemberg state parliament in Stuttgart. Photo: DPA Flowers at the entrance of the Institut Francais in Mainz on Monday. Photo: DPA

The violence in Paris was the biggest terror attack on European soil since simultaneous train bombings in Madrid in 2004 killed 191 people.