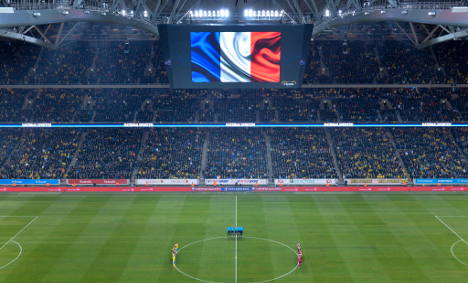 Sweden and Denmark's national teams observe a minute's silence during a game at the weekend. Photo: DPA.

A spokesperson for the German government confirmed to the AFP news agency that Merkel will attend after the German Football Association (DFB) announced on Sunday that the game in Hanover will go ahead as planned.

“The message is clear: we will not allow ourselves to be intimidated by terrorism,” said German Football Association (DFB) interim president Reinhard Rauball.

At least 129 people were killed in a series of violent incidents across the French capital on Friday, with several deaths taking place near the Stade de France where France were playing Germany in a friendly international.

“The fact the team will run out for a friendly against the Netherlands a few days after the bad experiences in Paris sends a message,” Rauball added.

“Our head coach Joachim Loew and every one of his players deserve respect for this demonstration of solidarity with the victims and the entire French people.”

The presence of Merkel and members of her cabinet amidst the expected tightened security in Hanover is seen in Germany as a show of support for the victims of the horrific scenes in Paris.

“We will check and adjust the security measures in consultation with the local authorities. There's a fine line, but you have to have a sensibility to the dangers,” said Hendrik Gross Lefert, the DFB's head of security.

In the wake of Friday's terror attacks, the fearful German squad preferred to spend Friday night at the Stade de France, attempting to grab some sleep on mattresses on the changing room floor, before flying home early Saturday.

Prior to the match, the German team had to switch hotels in Paris after a bomb scare.

Head coach Joachim Loew has explained why the world champions want to play the Dutch friendly.

“Basically, I am of the opinion that we do not yield to terror and terrorists should not be allowed the triumph that we dance to their tune,” said Loew, who described the events of Friday as a “nightmare”.

The German team were all given Sunday off to be with their families and will fly to Hanover on Monday, a day later than scheduled.

Schweinsteiger, Podolski and Neuer are rested, Hector and Boateng are injured, while teenager Sane will play for Germany's Under-21 side.

“Yet we all know that it's important to set an example and promote our values and culture,” said team manager Oliver Bierhof.

“But under these circumstances, the sporting value of the game against the Netherlands has, of course, been lowered.”

Schweinsteiger admitted on Facebook and Twitter that he is still “speechless” about Friday's events in Paris and the twin bombings in Beirut last Thursday.

“My sincerest condolences to everybody who is affected by this terrible tragedy. My prayers also go out to all the people who lost their lives the day before in Beirut,” wrote the Manchester United midfielder.

“No matter where you come from and what religion you follow – we are united.”