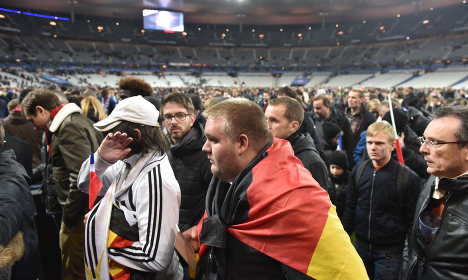 THE LOCAL FRANCE: Follow the latest on the Paris attacks“

The players were very worried, the information was not very clear and we didn't want to take any risk on the road, so we decided not to drive through Paris …. (which was) not 100 percent secured and so we stayed in the dressing room,” said Germany manager Oliver Bierhoff.

The attacks at several locations in Paris had erupted in the middle of Germany's away match against France at the Stade de France, with three loud explosions heard from outside the stadium in the first half.

It later emerged that one of the explosions was near to a McDonald's restaurant on the fringes of the restaurant, caused by a suicide bomber.

Bierhoff said the team had only learnt of the attacks when they were back in the dressing room, with players receiving text messages from worried family and friends.

“We are of course happy that we have landed safely, but our thoughts are with the relatives and the victims,” said Bierhoff, speaking after the team landed in Frankfurt early Saturday.

“The team is very affected, and therefore we decided to give them a day off today, for them to go home… and be with their loved ones,” he said.

Asked if the team would be ready to play their next fixture against the Dutch on Tuesday, Bierhoff said: “The game stands but we will of course discuss it internally.”

The German national football had earlier on Friday been involved in another bomb scare which saw them evacuated from their hotel in the French capital. It is not known whether that bomb scare was related to Friday night's terror attacks.