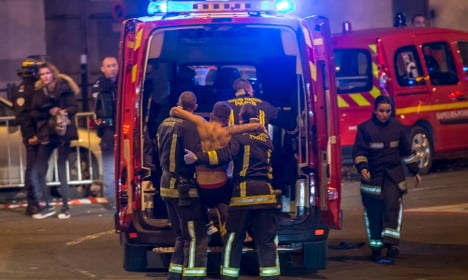 A victim of the attacks being helped into an emergency vehicle. Photo: DPA

THE LOCAL FRANCE: Follow the latest on the Paris attacks

Bavaria's state premier Horst Seehofer told a party conference there was “reason to believe” that a 51-year-old man arrested last week with several weapons in southern Germany was linked to attackers who killed more than 128 people in Paris.

“There is reason to believe that this is possibly linked” to the attacks, Seehofer said.

Seehofer explicitly linked the arrest to the refugee crisis, saying it “shows how important it is for us to have some clarity on who is in our country and who is travelling through our country”.

He reiterated his call for reinforced controls at Europe's external borders as well as at each European country's national border.

Police told broadcaster Bayerische Rundfunk (BR) that the man had a “professionally built hiding-place” in his car for the weapons.

Documents found on the man strongly suggested that he was on his way to Paris, although the police spokesman said that the idea he was linked to Friday night's attackers remained speculative.

“Weapon smuggling is a booming business,” the spokesman said.

“If someone is transporting several Kalashnikovs, hand grenades and explosives, that could be someone from a serious criminal background,” Bavarian interior minister Joachim Herrmann told BR.

“But there is a strong suspicion that this is about terrorist purposes… based on the man's mobile phone and his GPS system, there are clear indications that he wanted to travel to France,” Herrmann said.

Focus Online reported that the man was from Montenegro and that he has refused to speak in prison and not hired a lawyer to defend his case.

Bayerische Rundfunk reported that checks with authorities in Montenegro had found the man had no previous criminal record.

France was in a nationwide state of emergency after a night of horror in Paris when gunmen sprayed restaurants with bullets, massacred scores of concert-goers and launched suicide attacks near the national stadium.

German Chancellor Angela Merkel on Saturday pledged to “do everything” to help France in its fight against terrorists.

“We will do everything to help in the hunt for the perpetrators and instigators, and to carry out the fight together against these terrorists,” she said.

In a phone call, Merkel assured President François Hollande that Germany would offer any support France might need in the battle against terrorism, the Chancellor's spokesman said in a press release.

She was expected to meet with her justice, defence and interior ministers in the early afternoon on Saturday.