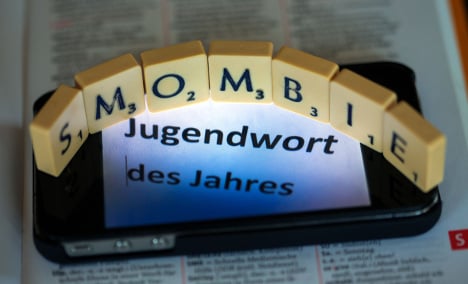 This word beat "merkeln" to the top spot. Photo: DPA

Running since 2008, the annual Youth Word of the Year contest is organized by dictionary publishers Langenscheidt.

The contest picks out the “hippest” word coined by German youngsters throughout the year, focusing on linguistic creativity and originality among other factors.

The most recent list was definitely a mixed bag – and not everyone was happy with the final decision.

The word, meaning “to do nothing” or “to decide nothing,” led the contest with 34 per cent of the votes – and threw light on a surprising level of political engagement among Germany's teens.

The term is probably a mix of encouragement and despair felt for Chancellor Angela Merkel, whose tendency to wait and gauge public opinion before taking a stance on something inspired the somewhat uncomplimentary verb.

By Wednesday, “merkeln” still claimed top spot in the rankings:

Other possible winners included “Earthporn” (very attractive pictures of landscapes), “Tinderella” (girls obsessed with online dating apps) and “Swaggetarier” (a vegetarian who only does it to look cool.)

But when the winner and runner-up were announced on Friday, Smombie swiped top spot, followed by Earthporn.

Each year's winning word is crowned after a series of public and jury voting.

For the first round, it's down to the public to vote from a list of 30 possible contenders.

This year's online voting opened on July 22nd and closed on October 31st – leaving a top-ten list for the jury to sift through.

Even so, not everyone was enamoured with the jury's final decision.

“Are there any words to choose from that are actually used by young people?” one Facebook commenter questioned, while another asked: “Is this word used BY young people or ABOUT them?”

Funnily enough, later comments seemed to support this claim that “Smombie” is more often used against teens than by them.

“Finally, a word that describes my daughter,” a Facebook user commented, while another noted: “a valid synonym could be 'all teenagers'.'”

Some readers also found it suspicious that “merkeln” had missed out on top spot, despite doing so well in public voting.

“Did the Chancellor put a veto in place?” one reader asked, while another complained: “even in the Youth World of the Year there's censorship! Because two days before the end of voting, “merkeln” was in first place by a long way!”

This isn't the first time Germany's Youth Word of the Year has caused arguments.

In 2011, the winning word “Swag” – meaning an enviable, cool charisma – raised eyebrows for its origins in the English word swagger.

The German Language Society (VDS) slammed the decision, telling The Local at the time that it was “a symptom of what’s happening in our society, that young people are seeing English as trendy”.

“It is a very big problem,” spokesperson Holger Klatte added.