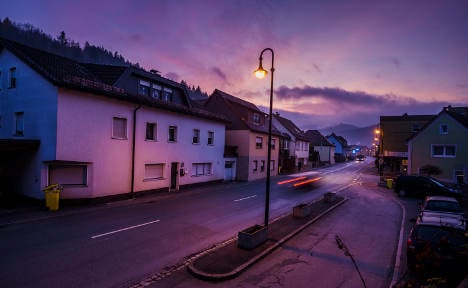 The house in Wallenfels where the bodies were found. Photo: DPA

The house where the bodies were found in the small town of Wallenfels in northern Bavaria is unremarkable in every way. A home-made butterfly is stuck to a window, reports The Süddesutche Zeitung (SZ).

But the picture of tranquillity is deceptive.

In this house police found multiple bodies of deceased babies. During Thursday night, the remains were taken away to undergo forensic examinations.

While crime scene investigators remained at the house on Friday, police announced that they currently believe eight infant bodies to have been in the premises.

“The bodies have been under examination since the early hours of the morning. The process will take some time due to the bad conditions [of the bodies] in certain cases,“ police said. “Results are not to be expected before early next week.”

Police are looking for a 45-year-old woman who previously lived in the apartment in the small town of Wallenfels.

“She is sought at least as the possible mother of the children,” said a police spokeswoman, who would not say if the woman is being considered a suspect.

Although the details are thin, it is known that the bodies were found in a single room when an ambulance arrived at the house on an emergency call.

It is not yet clear how long the children had been dead for.

First details have also emerged about the family who had lived in the home for 18 years. It was a couple with children, reports Bild.

One neighbour told the SZ they were “nice people“ who were from the neighbourhood. The mother had always taken good care of her children, the neighbour said.

Another local told Bild that the mother had told of having “several miscarriages”.

The family have since moved out of the house but have not yet been found by the police for questioning.

The local mayor in the 3,000-person town also spoke of a “great sense of disbelief“ in the community.

Such cases are not completely unheard of in Germany.

Last May, a woman was sentenced to three years and eight months in prison for killing two of her children and hiding them in a freezer.

In October 2013, in Bavaria, the bodies of two babies from the 1980s were found during construction works.