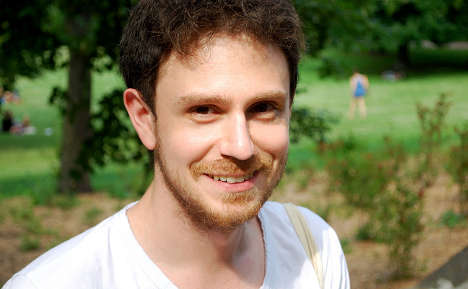 Berlin isn't an easy place to learn German. Especially if you work for an international company where your colleagues come from all over the world.

So sometimes it helps to think laterally about ways to improve your language skills.

Federico Prandi from Reggio Emilia in Italy came up with the idea of inventing a new German word every day for 100 days, a project he has been publicizing through Twitter and Instagram.

The result is an often hilarious insight into everyday anxieties and pleasures that are too complicated to have ever been given their own words before.

The 31-year-old's creations include a word for the act of keeping old clothes in the hope you will one day fit into them again – Wunschkleidungsbehalten (literally: wish-clothes-keeping), as well as one for the feeling that everyone is happier than you when you look on social media – Netzminderwertigkeit (net-depreciation-ness).

But Prandi's inventions are enabled by the compound word structure in German, where one can join two words together to make a new word – the most famous example being Schadenfreude (literally damage-joy).

Prandi told The Local that the project emerged from the frustration and isolation he felt when he first began to learn German.

“But the deeper motivation for me was wanting to express something but not having the words for it,” he explained. “In the beginning this was stuff like 'chair' or 'table'. It was a very powerful and isolating feeling.”

Indeed the project has been such a relief that he has way surpassed his initial 100 word target and is now aiming for 365.

“When I have done a full year, then I will give it up,” he insists.

Prandi's favourite real German word is a good example of the compound structure he has used for his own inventions.

“The words is Aufbruchstimmung [literally departure-mood]. Some people tell me it is a positive word meaning optimism about a new beginning. Others say it is the negative feeling you have at a party when you feel like you want to leave. For others, it is a feeling of melancholia that is neither positive or negative,” he explains.

One particular advantage he has seen in his project is the closer connection it has given him to German words for feeling.

“In German classes there is more of a focus on practical things and you only learn the more basic feelings like Freude (joy) and Angst (fear) but not more complicated things like jealousy,” he said.

It was only when he started inventing words for very complex feelings that he discovered the more emotional German words, he says.

But as beneficial as the project has been for him, it remains to be seen whether Prandi's words will ever make it into the Duden dictionary.

“I have yet heard of any of them catching on in real life,” he admits with a laugh. “But one that means going to the toilet just to take a break from life did very well on social media.”