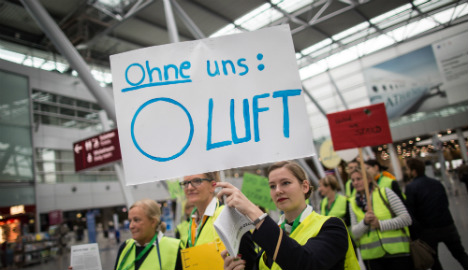 The airline has had to cancel 3,700 flights in total since the strike action began on Friday, hitting 443,000 people.

Passengers can check whether their flight is affected and find alternative transport using this webpage.

And there is little hope of bringing the strike to an end before the week is over, after labour courts in Düsseldorf and Darmstadt refused to put an early end to the walkout.

While Lufthansa said it has filed an appeal against those decisions, the court is not set to hear the case until 3.30pm on Thursday.

Lufthansa boss Carsten Spohr said on Wednesday that he would not back down from his demand that striking members of the Ufo cabin crew union come back to work before the two sides resume negotiations.

The dispute over pay and early retirement provisions dates back to December 2013, when the company decided to embark on cost cuts in the face of intense competition from no-frills carriers.