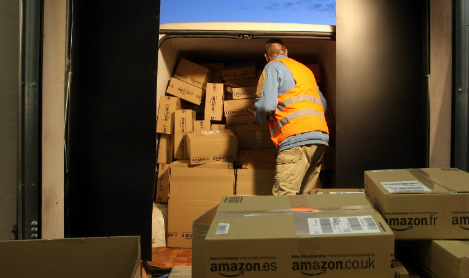 An Amazon worker in Graben, Bavaria loads packages into a van. Photo: DPA

If you're in Berlin or 13 other metropolitan areas, including Munich, Stuttgart, Frankfurt and the Ruhr region, an order for any one of around a million products could be on your doorstep the same day you click “buy”. Goods will arrive at customers' homes between 6pm and 9pm if ordered in the morning, starting on Thursday, Amazon said in a statement.

But even subscribers to the Prime service, which costs €49 per year, will have to order a minimum of €20 worth of goods to benefit from free same-day delivery.

“Prime members in the 14 metropolitan areas will find just about anything they need in the huge choice of products available on the same day,” Amazon Germany country manager Ralf Kleber said in the statement.

The new service from Amazon is likely to put pressure on German firms that have dipped their toes into same-day delivery, such as clothing giant Zalando, in the busy pre-Christmas period.

It remains to be seen whether the native offerings can stand up to the American giant, but German courier company Liefery, which also offers same-day service, told The Local that it didn't see Amazon as a threat.

“We don't see Amazon as a competitor, but rather as a a partner to establish same-day delivery as a standard,” Liefery co-founder and managing director Jan Onnenberg told The Local, adding that the company also sometimes works with Amazon.

“It is important that big mail-order businesses like Amazon take a chance on same-day delivery. Because of Amazon's notoriety, the option of same-day delivery will also become more well-known and in the future more frequently asked for by customers.”