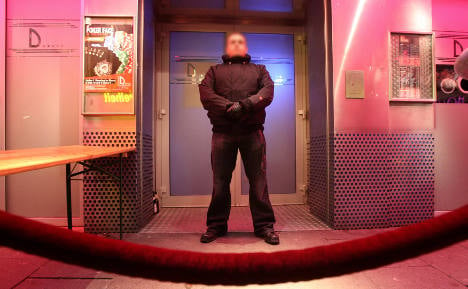 A bouncer at a German nightclub. File photo: DPA

Last Friday the owner of Brucklyn club in Bad Tölz, Bavaria, told his bouncers not to let a group of young men into the premises.

The group had apparently done nothing wrong. The problem was that they were asylum seekers.

The situation escalated when a couple of local guests saw what was happening and accused the bouncers of being “Nazis pigs”, according to a version of the story given by the club on Facebook.

But in the Facebook post the club admits to blocking entry to refugees in order “to maintain well-being in the club.”

“This is a clear example of racism,“ Hamado Dipama of the Munich Refugee Council told The Local. “It is totally unacceptable to punish a whole group because of the actions of a few people – that is the definition of racism.”

However, the club sought to explain in its Facebook post that the it was not motivated by racism.

“It was never an issue for us what religion, background or skin colour guests have. Everyone comes in as long as he respects a few basic, self-evident rules,“ the post explains.

When refugees began to arrive in Bad Tölz early in 2015 the club had allowed them in just like any other customers, the post claims.

But young male asylum seekers began harassing women in the establishment, following them to the toilets or calling them “whores“ and offering them money for sex, according to the Facebook post.

The nightclub writes that it faces a dilemma. On the one hand it could ignore the problem and face losing more and more of its old clientèle, as women become more reluctant to drink there.

The second alternative is “to only let a limited number of refugees into the club. That way the girls can feel more comfortable” – but on the other hand they are aware this leads to accusations of racism, they say.

But for Dipama there is a clear third alternative.

“Of course it's unacceptable that women are harassed, but there are white men who also do this in clubs,“ he says. “So the club should react in every individual case when a women comes to them with a complaint, not make a blanket judgement.“