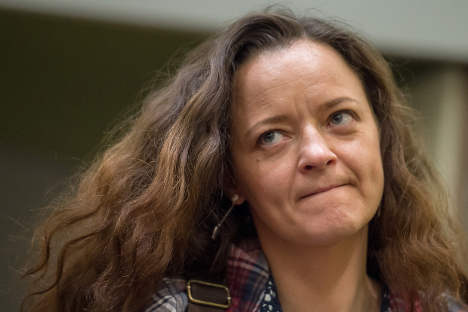 Every German knows her face. She was a core member of the National Socialist Underground (NSU), a Nazi terror cell which carried out a series of cold-blooded murders between 2000 and 2007.

Their victims were eight Turkish restaurant and shop owners, a Greek man and a German policewoman.

But just like her accomplices Uwe Mundlos and Uwe Böhnhardt, the German public has never heard Zschäpe speak.

The two men committed suicide shortly before the police could arrest them.

Zschäpe has not said a word since attempting to give an explanation to police hours after the other members of the cell died, before she changed her mind at the last moment.

But on Monday the 40-year-old shocked the country by announcing that she would give a statement to the court in Munich on Wednesday – a move which could begin to shed light on the workings of Germany's modern Nazi underground.

The families of the NSUs victims are desperate for answers and will be hoping that Zschäpe gives details on how the far-right terrorist selected their victims, and who led them to their targets, reports the Süddeutsche Zeitung.

But, according to Holger Schmidt, journalist for broadcaster ARD, “one should not expect too much. A confession seems just as unlikely as an apology. One should expect a form of justification, or her trying to claim the role of victim.”

There are several possibilities for what Zschäpe will say.

She could claim that she had no idea that the other members of the cell were carrying out murders. But for Schmidt this wouldn't pass muster with the court. Her fingerprints were found on a press clipping about one of the murders and she set fire to the house the three live in when she found out Mundlos and Böhnhardt had killed themselves.

Another possibility is the she will present herself as a victim, who was psychologically – and perhaps sexually – dependent on the male members of the group. But the evidence presented in court has so far shown her to be self-assured and controlling.

“It seems most likely to me that she was the one in charge – not the victim,” writes Schmidt.

One intriguing possibility is that she could claim to have been in the pay of the German secret services.

The NSU trial has already thrown up several embarrassments for the Federal Office for the Protection of the Constitution, Germany's domestic spy agency.

In July 2012 its head Heinz Fromm was forced to resign after revelations that the agency had shredded evidence in the wake of the NSUs exposure.

While this might seem far fetched, “in the NSU process I rule nothing out”, writes Schmidt.

But the ARD journalist cautions against getting too carried away.