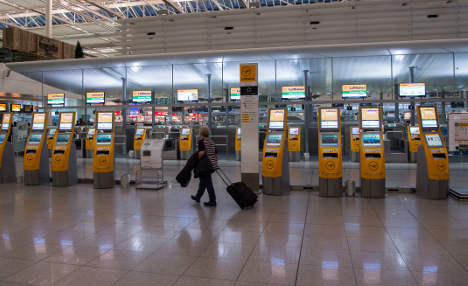 The stoppage — part of rolling industrial action the union threatened to continue until Friday — was due to hit Frankfurt, Düsseldorf and Munich airports on Monday, the UFO flight attendants' union said.

Lufthansa said it would cancel 929 of the day's 3,000 scheduled flights to or from the three cities, affecting 113,000 passengers, but that about 70 percent of its normal services would operate.

The airline also said its executive board would Monday discuss the “consequences” of the strike, which it called “unprecedented in the history of Lufthansa”, and issue a statement to employees and the public around 1700 GMT.

“Lufthansa has today reaffirmed that it is ready to resume talks,” it said in a statement.

The carrier voiced regret about the strike, apologised to customers and said it would publish new flight plans on www.lh.com and inform passengers of the status of their bookings by email and SMS.

UFO last Thursday said industrial action had become “unavoidable” after airline management failed to come up with an improved offer in a dispute over pay and early retirement provisions.

The strike on Saturday forced Lufthansa to cancel 520 flights, leaving 58,000 passengers grounded. The stoppage affected all domestic and European flights from Frankfurt and Düsseldorf.

Flights resumed for one day Sunday “because on that day, most flights are private”, said UFO.

UFO has said it plans to target different airports over the course of the week-long blitz of walkouts.

The union is demanding that a current system of early retirement provisions remain unchanged.

Lufthansa has argued that the system is too expensive in the face of competition from low-cost operators such as Ryanair and easyJet.

The dispute with cabin staff is separate from a long-running battle between management and pilots over the company's plans to change the pilots' early retirement arrangements.

The pilots, who are also concerned about Lufthansa's aim to further develop its low-cost activities, have staged repeated walkouts during the dispute.

Lufthansa shares were among the biggest gainers on the Frankfurt stock exchange on Friday, closing 3.26 percent up at €13.95.