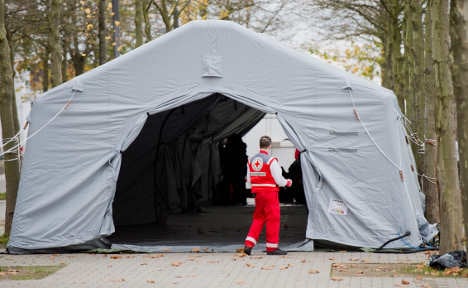 A tent at a refugee centre in Hanover. Photo: DPA

The report by Ernst & Young argues that Germany currently only has the capacity to house around half a million refugees.

But with almost that number already having arrived in the country – and 380,000 more projected to arrive before the year is out – that means housing solutions are still needed for 370,000 migrants.

The report included a survey of 300 local authorities in Germany who estimated that a total of 870,000 people would arrive in Germany in the whole of 2015 seeking asylum.

Over three quarters of local authorities said that their greatest challenge was finding shelter for all the refugees who arrive at their door. Almost two-thirds also voiced fears over the lack of reliable numbers of arriving refugees.

“There is no middle or long-term plan, mainly because it is so unclear how the number of refugees who arrive is going to develop,” said Busson.

A clear majority of local authorities are not planning to raise taxes to deal with the problem, but one in every four said that they would take on additional debt to cover the costs this year, while 40 percent said this was the reality they face for 2016.