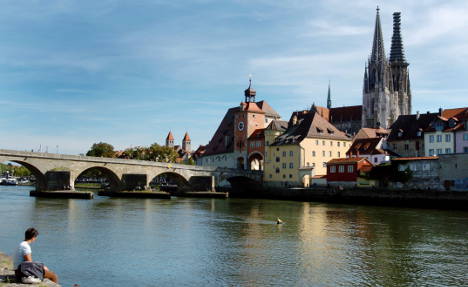 The normally sleepy medieval town of Regensburg has been in a state of upheaval over the past week.

First a massive second world war bomb was found in the town centre, leading to over 5,000 people being evacuated from their homes.

And now the town seems to be ablaze with political unrest.

Sixteen different demonstrations have been called for Saturday. Town authorities have had to reserve almost every centimetre of public space to appease a sudden surge in political activism.

But there is something odd about these marches. The themes all seem to be rather similar. One goes under the name 'Demo against Nazis' another runs with the title 'No place for Nazis' and yet another is calling people to the streets for a 'Demo against right-wing violence'.

In fact, so similar are the calls to arms that the Mittlebayerische Zeitung speculates some of them will have no participants at all.

But then the point of the protests is not to have people turn up, but to prevent another demo – one that followers of right-wing, anti-Islam group Pegida were rumoured to want to hold.

Pegida originated in Dresden in east Germany, but has since spread to many other towns.

Its name is an acronym for “Patriotic Europeans Against the Islamization of the West”, and in recent months it has taken up the far-right cause against refugees arriving in Germany.

The movement is widely condemned as xenophobic and its leader is under investigation for inciting racial hatred.

A spokesperson for the city of Regensburg told The Local that a rumour spread on social media that people with Pegida affiliations were intending to hold a demo on Saturday, and concerned locals then jumped in to book up all the best spots.

“There was interest in holding a demo from the other side, but when they realized that there is no attractive space left they pulled out,” she said.

If they were to have had a demo their only choice would have been a spot on the edge of town.

It seems that the ancient town is infertile land for the far right to try and grow its support.

There are three Facebook pages which claim to represent Pegida in the town, which has a population of 140,000, and none of them has more than 60 followers.

“We don't have Pegida here,” said the city spokesperson. “We only have a few people who are somewhat close to them.”

But she added that the city has no truck with far-right sentiment.

When the xenophobic National Democratic Party (NPD) marched in the city a year and a half a go, huge numbers of people came onto the streets to oppose them. The NPD meanwhile was only represented by a couple of dozen people bussed in from outside.