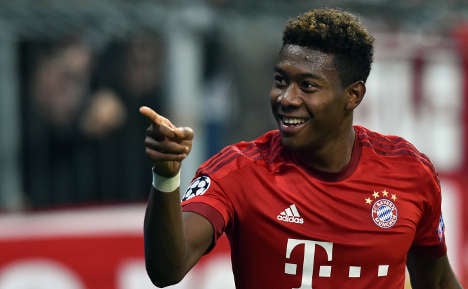 Robert Lewandowski, David Alaba and Arjen Robben were also on target as Pep Guardiola's Bayern emphatically avenged their 2-0 defeat at the Emirates Stadium a fortnight ago, their only loss of the season.

“That was a key game for us, otherwise we would have had a lot of work to do in the group,” Müller told ZDF.

“If we win our next game now, we should be through, so tonight was a big step.”

France striker Olivier Giroud scored Arsenal's consolation goal with 20 minutes left while, between them, Müller and Lewandowski have scored 31 goals for Bayern in all competitions this season.

This was Arsenal's joint heaviest away defeat in Europe, equalling the 4-0 drubbing at AC Milan in the last 16 in February 2012.

“The early goal freed Bayern up a lot and on this occasion we had less courage than the home game,” admitted Arsenal's Germany centre-back Per Mertesacker.

With two games left, Arsene Wenger's side have only a mathematical chance of reaching the knock-out phase after Dinamo Zagreb's 2-1 defeat at Olympiakos.

The Gunners have three points along with Dinamo, while Olympiakos and Bayern both have nine with the Germans top of Group F on goal difference.

“We have to win both games and get two goals on Olympiakos, but it's not over and that's how we have to approach it,” added Mertesacker.

Arsenal next host Dinamo in a fortnight, then play Olympiakos away in their final game.

“We need to bounce back and put away negative energy,” said the Arsenal star.

Only seven of the Arsenal side who beat Bayern at the Emirates Stadium started at the Allianz Arena on Wednesday.

Guardiola had no such injury concerns and opted for fleet-footed wingers Douglas Costa and Kingsley Coman on the flanks with Netherlands captain Robben on the bench.

The hosts got the early lead when Thiago floated a cross over the Gunners' defence and Lewandowski flicked his header into the Gunners' net on 10 minutes.

The lead looked to have lasted just three minutes when Arsenal's Mesut Ozil put the ball in the Bayern net with his shoulder, but the Germany midfielder was booked for a handball and the goal was not given.

Bayern doubled their lead with the half hour approaching when Coman fired in a shot, which was blocked, and Müller stabbed home the rebound, which took a deflection off Mertesacker.

Arsenal goalkeeper Petr Cech palmed a Müller shot over the bar, but Bayern went into the break 3-0 up when left-back Alaba unleashed a fierce left-footed shot which flew past the Gunners shot-stopper.

Robben scored with his first touch, less than a minute after coming off the bench when he flicked Alaba's pass into the Arsenal net for his first Champions League goal for more than a year on 55 minutes.

Giroud offered Arsenal brief hope by volleying home with 20 minutes left after making the most of an innocuous Alexis Sanchez cross for the Frenchman's fifth goal in six games.

Müller grabbed his second and Bayern's fifth on 89 minutes when he slid his shot under Cech to compound the Gunners' misery.