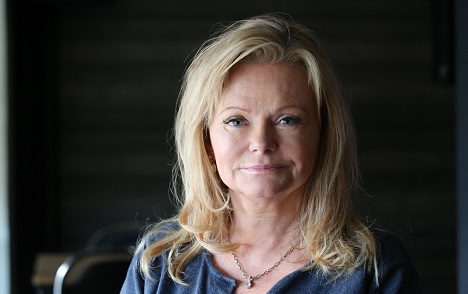 Maud Spencer started working at Svalson 15 years ago – but she has always been surrounded by Svalson glass.

“Svalson is a family company. It was founded by my father and his brother-in-law, and I took over as CEO about ten years ago,” Spencer tells The Local.

“Now my brother and my cousin work here, and during the summer my two sons come and work here as well.”

It’s a small company, employing just about 40 people in the small northern Swedish town of Öjebyn, but it’s been going strong for 35 years now, thanks to its one-of-a-kind products.

“We are world leaders when it comes to sliding windows,” Spencer says. “We have totally changed the way a reception looks, and all of our windows are tailor-made.”

In fact, Svalson is the creator of the only fireproof automatic sliding window in the world – a niche market, but nevertheless an important one, Spencer says. The window has been tested and approved by European standards and is accepted throughout Europe.

“That means we can sell it over the world – Australia and Japan accept it as well.”

There’s just one notable exception: the US.

“America doesn’t accept it,” Spencer says. “If we want to sell it in America then we need to do the tests again in the US.”

That would involve flying not just staff but the massive windows themselves to the US – and would cost at least €32,000.

“For a big company that wouldn’t be a problem at all,” Spencer muses. “But for a family company of our size, it’s an issue.”

Svalson has always been an international company, selling to other European countries very early on. But for decades they have been forced to avoid the US.

“We always received lots of requests from the States but we said no,” Spencer explains. “It’s just too complicated.”

Recently, the company has discovered a loophole that allows them to reach some customers in the US: exporting via a distributor in Canada.

The United States’ northern neighbour accepts the standards and certification of Svalson’s products. Yet it’s a cumbersome and expensive way to export – when they should be able to go direct to their American customers:

“They don’t have to pay the duties or get stuck with paperwork like we do, but they definitely hike the price. It becomes much more expensive for the end user.”

In a sense, the Canadian loophole illustrates the absurd nature of many of the trade and regulatory barriers that exist between Europe and the US. Standards are similarly high on both sides of the Atlantic, but are not mutually recognized.

For small businesses like Svalson – and the end customers on the other side of the Atlantic – TTIP would be a game changer, saving both customers and manufacturers time and money.

“TTIP would make a huge difference for small companies,” Spencer says. “It takes away the bureaucracy and would speed up customs, and obviously it would help with the prohibitive costs.”

Accessing the American market would double not only sales for the company, but the size of their team as well.  And it would be only natural, Spencer says.

“We really would like to take our products to the US. We have the same values, the same needs. Why not?”

Spencer says that Svalson would gladly accept US standards. But then it should be enough to allow their products through without additional costly testing.

“We can very easily adjust to new standards as long as we know what they are. So that is what we need, to have the same standards and not have to go through expensive tests so many times. It’s a shame to burn so many of your products,” Spencer remarks.

And it’s a two-way street, the Swede adds. European companies could learn a lot from American regulatory standards as well.

“For example, one of our products is a railing we use for balconies,” Spencer explains. “But in the US it is only allowed for use on the ground floor because the top of it is flat. In the US railings have to be round so you can’t put a glass on it or something.”

Spencer says that’s exactly the type of standard that Europe should adopt as well.

“We would make safer and better products if we could use the best of both standards.”

This article was produced by The Local in partnership with Svenskt Näringsliv, The Confederation of Swedish Enterprise.