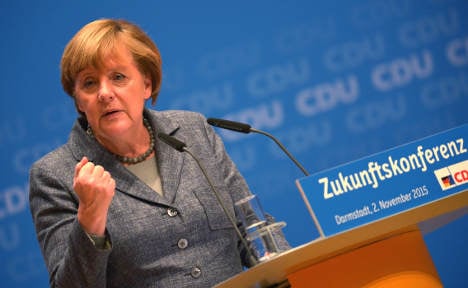 Speaking at a conference in Darmstadt in southern Germany, Merkel said that if Germany closed its border to Austria it could result in military conflict, reports Spiegel.

Merkel said that the fence built by Hungary on its border with Serbia “will build up fault lines“ between the states in the Balkan region, many of whom were involved in a bloody war in the 1990s.

“I don't want to it to happen that military conflict is once again necessary there,“ Merkel said, adding that while she didn't want to be a harbinger of doom, escalations into violence happen more quickly than one thinks.

The chancellor said that a rise in tension between Balkan states is what led her to recently call a conference to discuss the refugee routes through the region.

The danger is that if Germany closes its border then these countries will do likewise, she continued.

Merkel added that it was Germany's responsibility, as the largest state in the EU, to find a resolution to the problem that encourages solidarity rather than division.

“I am pretty sure we can achieve that,“ said the Chancellor.

“I don't think that building border fences would directly cause [military confrontation],“ he said. “These states are trying to get into the EU and they want to present a good image of themselves.”

Merkel is most likely trying to create a fear among the Balkan countries that stops them before they take the decision to erect barriers along their borders, he added.

But Töpfer also cautioned that one shouldn't downplay the deteriorating situation in the Balkan region, emphasizing that the wars of the 1990s are “dormant rather than solved.”

There is a trend back towards nationalism in the region, which the EU has supported by funding nationalist rather than moderate political groupings, he asserts.

“In these countries there is widespread poverty and a struggle over the few resources they have. If you suddenly add half a million refugees to this system you increase the tension that exists there.”

On Thursday, Merkel is again scheduled to meet coalition party heads Sigmar Gabriel and Horst Seehofer to discuss the topic of transit zones for refugees.

The proposal to process asylum applications before refugees cross the border has until now been roundly rejected by Sigmar Gabriel, leader of the centre-left Social Democratic Party.