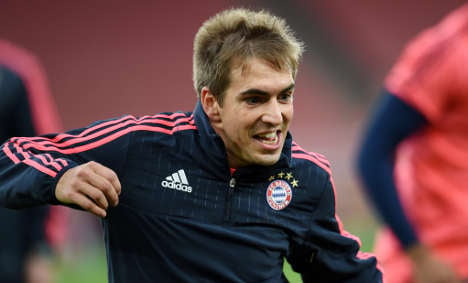 Bayern suffered their only defeat of the season at the Emirates Stadium a fortnight ago when they lost 2-0 to the Gunners in London.

Arsenal's Germany defender Per Mertesacker has said he expects Bayern to be “wounded” and will “want to prove that they are better than us” at the Allianz Arena, but Lahm rejected the notion.

“Why should we be wounded? We're focused, but we have no reason to be wounded,” said Bayern's captain with the Germans top of Group F.

“We are top of the Bundesliga and our Champions League group, you can't get much better than that.

“We weren't wounded after the away defeat.

“We're playing at home, it's a top game and we want a win to consolidate our place at the top of the table.”

Arsenal are third-placed in the group, but are unbeaten in their last two visits to Munich and Lahm says Bayern will take nothing for granted.

“This is a big challenge against a team like Arsenal who have individual top players,” said Lahm.

“We didn't take our chances in London and we have to do much better on Wednesday. It would be great if we can take our first few chances again and put the opponent under pressure. We don't need any extra motivation for the Arsenal game.

“This is the Champions League. We're playing at home and anyone who isn't motivated is in the wrong place.”

Bayern striker Robert Lewandowski has scored 17 goals in all competitions this season, but failed to find the net in their 3-1 cup win at Wolfsburg and the Frankfurt draw — something he wants to rectify.

“I've gone two games without a goal now, obviously I want to score again. I will give everything for that,” he said.

“The most important thing is that we control the game and score the first goal. We must not lose control of our game and need a good mix between defence and attack. We can't just run around blindly against an opponent like that. We have to be patient.”