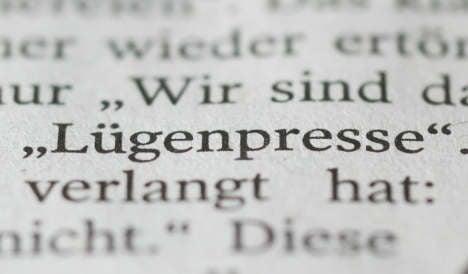 "Lügenpresse" 'The lying media' printed in the Tagesspiegel when it was named "un-word of the year 2014". Photo: DPA

According to his account on the social media site, Helmut Schümann was attacked from behind by unknown persons who asked him “are you Schümann for Tagesspiegel? you left-wing pig“, before knocking him to the ground.

In a later post Schümann tells his attackers that they will not silence him, saying he will continue to “shout about them and write about them.“

In a later post he writes that “physically I'm recovering fast but mentally it is taking longer.”

The columnist had written an article on Thursday questioning whether he could continue to call Germany his country given what he described as the rise of right wing extremism and xenophobia embodied by organizations such as Pegida and the Alternative for Germany.

Violent attacks on the rise

Attacks on supporters of refugees have become increasingly common in recent weeks, while violence against refugees and the places they live continues to be a major problem.

In the most serious incident to date, Cologne Mayor Henriette Reker was stabbed in the street last month due to her pro-refugee stance during the city's election campaign. She survived the incident without sustaining life threatening injuries.

An arson attack against the car of a right-wing politician in Berlin last week meanwhile has been seen as evidence of a general trend towards violence in the refugee debate.

And on Sunday, large groups of anti-refugee demonstrators turned violent in the Saxon town of Meerane, throwing bangers and attacking police who tried to break their blockade of asylum seekers transferring from trains to buses.