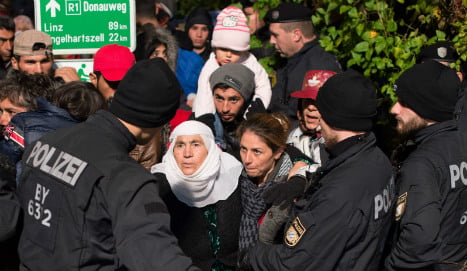 Police speak with refugees on the Austrian border. In the background, a sign indicates the distance to Austria's third-largest city, Linz. Photo: DPA

“It's only a question of time before the first baby freezes to death here,” Passau district police spokesman Lothar Venus said.

Around 2,500 people were waiting in the open on the Austrian side of the border on Wednesday night, huddling together under the harsh glare of searchlights.

Police have complained that Austrian authorities often bring large groups to the border in the late afternoon or evening.

“It's no problem up until midday. But in the late afternoon, it's blow after blow. Our Austrian colleagues are just as overloaded as we are,” Freyung district police spokesman Thomas Schweikl said.

At 700 metres above sea level, temperatures fell to around 2 C, and a stream flowing nearby added damp to the harsh conditions.

On the German side, there are simply not enough buses to bring refugees to accommodation elsewhere in Bavaria, leaving them stuck until transport arrives. Refugees gather around a makeshift fire on the Austrian border. Photo: DPA

“What do ten buses mean faced with this many people? We would need 40 to bring these people here quickly into the warm,” Venus said.

He added that the risk was increasing that the refugee groups would begin moving into Germany of their own accord, walking the three kilometres along an unlit main road

On Wednesday night, officers were able to avoid that scenario repeating itself, in part by housing people in a workshop cleared out specially by a local business owner – at least offering 300 people a roof over their head.

At the border itself, the Red Cross handed out tea, vegetable soup and fruit.

But few of the refugees accepted the proffered blankets, preferring to hang on to their place in the queue.

All eyes will be on a meeting Angela Merkel has called with state leaders this weekend to deal with the problem.

The Chancellor's gathering is a response to Bavarian state premier Horst Seehofer's ultimatum demanding that she work with Austria to stop the flow of people by Sunday – or else he would act on his own initiative.