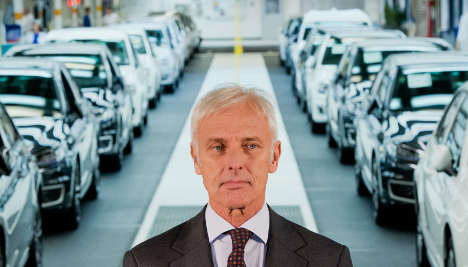 VW said provisions related to its admission that it fitted 11 million diesel vehicles worldwide with sophisticated software to skew emissions tests pushed it deeply into the red in the period from July to September.

The group also warned of further “considerable financial charges” related to legal proceedings over the scam, over which it is the subject of criminal probes in the United States and Germany.

Volkswagen, which has just been overtaken by Toyota as the world's biggest carmaker in terms of sales, ran up a net loss of €1.673 billion after tax and interest in the three-month period, compared with a profit of €2.971 billion a year earlier.

The losses were due to a charge of €6.7 billion VW took to cover the initial costs of the scandal, primarily a recall of all vehicles fitted with the software scheduled to begin in January 2016.

Excluding that provision, operating profit would have remained stable at €3.2 billion in the three-month period, VW said.

Third-quarter sales revenues, or turnover, advanced by 5.3 percent to €51.487 billion, while deliveries to customers fell by 3.4 percent to 2.392 million vehicles worldwide.

“The figures show the core strength of the Volkswagen group on the one hand, while on the other the initial impact of the current situation is becoming clear,” said Matthias Müller, who was appointed chief executive shortly after the scandal broke to steer VW out of its biggest-ever crisis.

“We will do everything in our power to win back the trust we have lost,” vowed Müller.

“The Volkswagen group has very solid and robust liquidity resources. This will help us manage the challenging situation caused by the financial impact of the diesel issue,” added chief financial officer Frank Witter.

With regard to the full-year outlook, VW said that “because of the charges related” to the scandal, “we expect 2015 operating profit for both the group and the passenger cars division to be down significantly year-on-year.”

Nevertheless, VW expected deliveries to customers in 2015 “to be on a level with the previous year in a challenging market environment,” the report said.

And “depending on economic conditions, we expect 2015 sales revenue to increase by up to 4.0 percent above the prior-year figure,” it said. In 2014, VW sold 10.217 million vehicles worldwide and booked operating profit of €12.697 billion euros on sales revenues of 202.5 billion euros.

The pollution scandal which broke in September wouldn't have had much time to impact VW's third quarter sales, but global carmakers are also struggling with a slowdown in China and a recession in Brazil, two emerging markets which had accounted for a large portion of sales growth in recent years.

VW said however it expects to face “considerable financial charges” from legal risks related to the scam.

In addition to the €6.7 billion already set aside, “considerable financial charges may be incurred as legal risks crystallise,” the report warned.

In addition to criminal investigations in Germany and the United States, VW is also facing regulatory probes in a host of other countries.

Despite the whopping third-quarter loss and the warnings of still heavier costs to come, VW shares were the biggest gainers on the Frankfurt stock exchange on Wednesday as analysts had been expecting it to skid even deeper into the red.

US complains of VW intransigence

Meanwhile Transportation Minister Alexander Dobrindt said Tuesday that US officials have complained about Volkswagen's cooperation over the past few months.

In September, US regulators – the Environmental Protection Agency (EPA) and the California Air Resources Board – said Volkswagen could face an $18 billion (€16.3 billion) penalty over the software made to meet clean-air standards during official emissions testing but which would intentionally turn off during normal operations.

“Our American partners have explicitly praised the cooperation and exchange of information with Germany,” Dobrindt told journalists at the German embassy in Washington following a meeting with EPA officials.

But “at the EPA, there was criticism about cooperation with Volkswagen these past few months,” he said, adding that the annoyance was clearly discernible and that it would take “considerable work” to rebuild a breach of trust.

“There's no sugarcoating it – that's what our colleagues (at the EPA) told us very clearly,” Dobrindt said.

An EPA spokeswoman said she did not have any details to share about the meeting.

Dobrindt is on a tour of the United States that will also take him to Michigan and California.

On Monday he met with his US counterpart, Transportation Secretary Anthony Foxx, to also brief him on the steps Berlin was taking to address the VW scandal.

During that encounter, Dobrindt offered to keep Washington posted on a regular basis and also invited US experts to visit Germany for a closer look at the technical steps underway to follow up on the affair.

Dobrindt said Foxx assured him that Germany would remain a strong auto industry partner for the United States.

“We are a welcome partner… This is specifically about one problem – diesel motors and manipulation by Volkswagen,” Dobrindt said.

When asked about fines, Dobrindt said that there had been no final determination on that point and that it appeared that US authorities were still in the analytical phase.