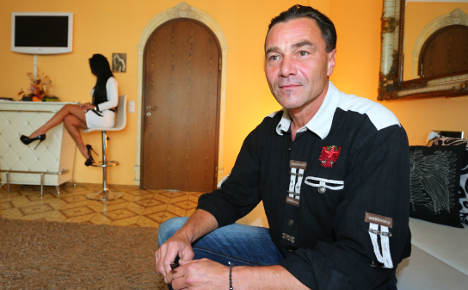 From outside, the bungalow in Dachau on the outskirts of Munich barely catches the eye. The plain house is partially hidden by a mechanic's garage.

It's only when you're inside that it becomes clear this is no ordinary suburban home.

The “Salon Patrice“ is a brothel – one of those discreet houses which one comes across now and again even in Catholic Bavaria.

What is different about this brothel is its owner, the man sitting on the white leather sofa.

When he opened the brothel 11 years ago, Uwe Ittner named his business after his former girlfriend Patrice. But for a quarter century before that he was a policeman – and not just any old cop. He was a detective, an investigator.

A distance of around 30 kilometres separate the “Salon“ from the police headquarters, but it is another world.

“Many of them didn't want to have anything to do with me any more,“ says Ittner, as a fire blazes in the hearth. “The few friends I had there accused me of changing teams. For them I was a pimp.“

The police union knows of no other such case where this has happened.

“Lots of policemen start working for security firms when they leave service,“ said a spokesperson, adding that he'd never heard of someone opening a bordello.

Ittner has now written a book titled “From Blue Light to Red Light” about his experiences.

“If I were a policeman today, I'd be sitting in some warm office with my feet up and at a certain point I'd pop open a wheat beer,“ he says. “The question is whether one wants such a life. I didn't want it then. It wouldn't have satisfied me.“

'It was eating me up'

When he was a policeman Ittner got to know a prostitute by the name of Patrice.

“I would never have thought of opening a brothel otherwise,“ he reflects.

“We fell in love – the only blemish being that I was a cop and she was turning tricks. I didn't have a moral problem with it. But no one was allowed to know. It's not exactly looked well upon when a policeman is in a relationship with a whore.“

Police are bound to certain moral codes, a spokesperson for the police union confirmed, explaining that “the state's skirt is tight but warm.“

But this wasn't Itnner's biggest problem.

“I knew that it was just an illusion that she was selling, but it ate me up when I knew she was at work and having sex with who knows how many men.

“We kept on fighting and eventually we came to a decision point – either we separate or she gives up her job. Then she had the idea of opening up a brothel.

But even that wasn't easy.

“Just from a practical point of view there were difficulties. Where do you open such a house? Where do you get permission? In Bavaria a community needs to have at least 30,000 inhabitants before you can open a brothel.

“Next to a kindergarten it's banned, and next to schools. Then there are business questions – what's the competition like? Next you need to find a landlord. Where do I get a business account? It wasn't just a case of stamp, done.“

But the business has now been up and running for 11 years.

“We're a so-called appointment house and have between four and five women who change around each week.“

Itnner's phone rings. The caller says that she doesn't know where the key for locker B is. She uses Locker C when she works.

“A key is missing,“ Ittner says with a sigh. “That's also part of the job of a manager of this type of place.“

He has mostly handed over everyday management to the new woman in his life while he stays at their home in a nearby forest.

“We're pretty withdrawn. And I've become quite unsociable. I don't need all that any more – clubs, the high life – I've had enough of all that. Where there's people stuff happens. But when too much happens, it's no longer so amazing -. you look into the abyss too often. I didn't want that any more.“

But despite the unusual change of career, he still sees some continuity.

“When I tell people what I do they flinch sometimes – but that wasn't any different as a policeman.“