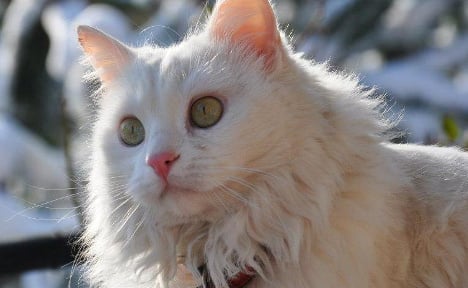 In late July, the six-year-old Turkish Angora went out on his daily stroll round the town of Würselen, near Aachen.

“He would always come home at midday,” owner Claudia von Büren told Bild. But on that day, Aljosha didn't come back.

Asking neighbours if they'd seen him, von Büren also handed round 150 flyers with Aljosha's picture – but to no avail.

After disappearing from home, Aljosha had found his way into the wine cellar of a house a few doors down.

After licking up the wine, Aljosha had a dangerous level of alcohol in his system.

“He was more dead than alive when I picked him up,” said von Büren.

“We went to the vets straight away, where they diagnosed him with alcohol poisoning.”

Aljosha was on a drip for three days before being allowed home.

He has now recovered from his hangover – known in German, ironically, as a “Kater” (tom-cat).

There's just one small problem, reports Bild: Aljosha now refuses to drink water, apparently out of fear that it's yet more white wine.