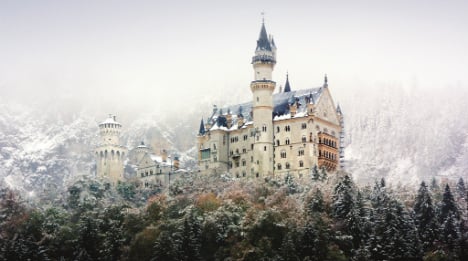 Bavaria is far from the top spot at number eight – outdone by, among others, Transylvania in Romania, Friaul in Italy and Auvergne in France – but earns rich praise from the authors nonetheless.

“From the huge Alps to the gently rolling Frankish wine hills, there's a unique collection of touristic delicacies to discover,” they write.

Munich in particular “enchants with large parks, first-class museums, imposing buildings and the Oktoberfest, the greatest folk festival in the world,” they write.

Here are some ideas from The Local to keep you on your toes in Bavaria:

1. Moving from India to Munich changed my life

Expat blogger Shaira Mohan writes for The Local about some of her favourite places off the beaten track in Munich and how the city differs from her home in New Delhi.

Cave-diving is a fun sport to enjoy with friends, especially in a country with a fantastical body of fairytales to draw on – but in extreme situations there's always a hint of danger involved. In 2014, a man was trapped for days 1,000 metres underground in the Risending caves in the Alps – before being slowly winched to safety.

3. Kings, castles and kitsch: getting to know the real Bavaria

Bavaria wasn't built yesterday – in fact, we've been writing about it for as long as The Local Germany has been around.

One of our predecessors wrote this in-depth piece covering the best routes to take, sights to see and – radically – why you might want to avoid Munich altogether.

If you do plan to visit the mountains, you might want to make it quick – activists are fighting to get rid of the distinctive Alpine cow bells that have been a feature of the soundscape there for centuries.

4. What to expect at Munich Oktoberfest

If, on the other hand, you want to get stuck straight into the half-chickens and litres of beer – well, bad news, because Oktoberfest just happened. But you can arm yourself with all the information you'll need by reading through The Local's comprehensive guide.

5. Visit the hottest town in Germany

Perhaps another one to leave until next summer – but just a couple of months ago, Kitzingen was setting records for the highest temperatures measured in Germany since 1881.

6. Watch out for US troops falling from the sky

Earlier this year, north Bavaria was rocked by a huge crash as a US Air Force F-16 fighter jet crashed into the woods. The investigation is still ongoing as to what may have caused the mishap (the pilot was fine). And just a few years ago, no less than 50 paratroopers were hurt during a mass training exercise at the Hohenfels training area which saw 1,000 elite soldiers dropping from the sky.

As the US Consul General in Munich told The Local this week, there are 95,000 US millitary personnel in Germany, many of them in Bavaria, so you might well bump into them even if they don't fall on your head.

7. Enjoy talking to the locals

While Bavarian dialect is largely impenetrable to those not born and raised in the Free State, other Germans still seem to love their accent when they deign to speak Hochdeutsch.

In 2013, they went so far as to vote the Bavarian accent the sexiest in Germany – although that apparently hasn't helped boost the sex lives of Bavarians. Too much of a good thing?