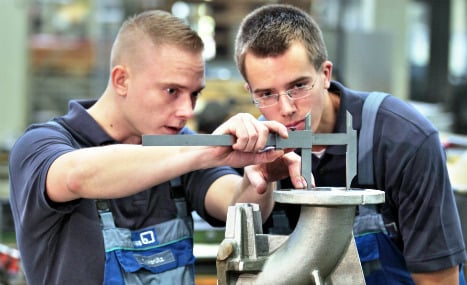 Too many young people are shut out of education, training and jobs in Germany, the study found. Photo: DPA

The Bertelsmann Foundation Social Justice Index found that 26 million children and young people – 27.9 percent of all those under 18 – are currently threatened by poverty and social exclusion across the EU.

In Germany 19.4 percent of under-18s are at risk of poverty or social exclusion, the study published in western Germany showed.

And 5.4 million of those aged 20-24 – 17.8 percent of that group – who are not in education, employment or training (NEETs) have “limited future prospects”, the authors write.

“We can't afford a lost generation in Europe, either from a social or an economic perspective,” Aart De Geus, Bertelsmann Foundation chairman, said of the results.

“The EU and its member states have to make special efforts to sustainably improve opportunities for young people.”

Social justice: could do better

Despite its comparatively healthy economy, Germany only ranked seventh out of the 28 EU nations on the Social Justice Index, scoring 6.52 compared with first-placed Sweden's 7.23.

While that was slightly worse than 2014's score, “the country has measurably improved since our first social justice assessment in 2008,” study author Daniel Schraad-Tischler found.

Germany has the lowest youth unemployment of any EU nation at 7.7 percent and is second only to Sweden for overall employment levels, at 73.8 percent of the working-age population.

But that figure has been achieved with a very high proportion – 40 percent – of 'atypical' jobs, which see holders of fixed-term contracts and low-salaried jobs threatened with poverty despite working full-time. For many young people, low-paid service industry jobs are a trap they can't escape. Photo: DPA

These “may have been an advantage in terms of securing industrial flexibility” but their more frequent use “has potentially severe consequences for the social welfare system, in particular, and social justice, more generally,” Schraad-Tischler wrote.

“Opportunities for advancement within this low wage labour market are few.”

Germany needs to make it easier to move from these non-standard jobs to real employment, as well as well as lifting barriers in the way of those not born in Germany, to make serious inroads on this measure, Schraad-Tischler suggested.

Social cohesion is something Germany does right.

Schraad-Tischler noted that Germany has a very low proportion of NEETs among young adults at 9.5 percent – a figure that has actually declined since the onset of the economic crisis.

And the country scored highly on measures of integration, non-discrimination and social inclusion, especially given its relatively high proportion of people from migrant backgrounds (15 million people, or around 20 percent of the population).

But he cautioned that Muslim migrants have had a more difficult time than others, with lower educational achievement and a higher unemployment rate than other groups.

“The influence of a student's socioeconomic background on his or her educational success… is still far too high in Germany,” Schraad-Tischler wrote.

Young people hunt for a job or training position at a job fair in Halle, Saxony-Anhalt. Photo: DPA

Germany has made some progress on this front in recent years, but continues to slip on the wealth gap between young and old.

Schraad-Tischler found that five percent of under-18s are coping with “serious material deprivation”, compared with just 3.2 percent of the over-65s.

And he cited experts' judgement that the country's recent pension reforms “undermine the long-term sustainability of the pensions system… and burden younger generations and business with higher financial costs.”

Encouraging old people to relax back into a comfortable pension rather than keep working for longer, as had been the pattern of reforms in recent decades, puts more of a burden on the young.

Meanwhile, among the Union's other big countries, France and the UK only made it to 12th and 13th places respectively, while Italy languished near the bottom of the table at 25th, with a score of just 4.69.

Other southern and eastern nations, including Greece, Romania, Bulgaria, Spain, Croatia and Portugal packed the lower end of the rankings.

“Lots of highly-qualified people don't even get into the labour market [in southern Europe],” Schraad-Tischer said. “The transition from education into jobs doesn't work.”