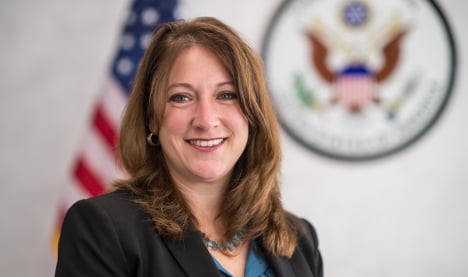 Gavito's arrival in Munich as the first female Consul General there was heralded, especially in the German media, as a historic event. Bild called her “Miss America” while the Abendzeitung München reveled in her taste for German beer and Oktoberfest.

This isn't Gavito's first foray into German life. She visited as a teenager as part of an exchange programme to North Rhine-Westphalia and has taken other foreign service positions in Stuttgart and Frankfurt.

But most of her career has been in the Middle East. She served as chief of the political section to the US Consulate General in Jerusalem before taking the Munich position and also spent time in Dubai and Lebanon.

The Local spoke with Gavito recently about settling into life in Germany and how international conflicts have impacted the US-German relationship.

How has it been for you, moving to and adjusting to German life? What are some of your goals while here?

I spent most of my career in the Middle East, so I am dying for the first snow.

The top priority for any consul general is the support of its own citizens. That’s why we have missions in the first place. We have 95,000 Americans in the military and on the civilian side. The consulate issues about 5,000 passports each year and about 500 births abroad are reported each year.

My overarching goal is to deepen and strengthen the transatlantic relationships between Bavaria and the US. The United States is Bavaria’s top export partner. I think we are doing a good job there.

What does it mean to you to be the first woman in your position?

For me personally it’s a thrill. It’s a great job and to be fair though, it's not necessarily an enormous new thing. For whatever reason, there had not been a woman in Munich before, but we do have women in top positions all over the world. I don’t think the fact that we hadn’t had one in Munich before means anything.

It’s another diplomatic assignment for me. I’m glad to have the opportunity. Munich is such an amazing place to live.

The role of women in both the US and Germany is a topic of discussion, to empower them and give them the tools to compete equally. I think that is something that both societies do well and there’s always room to talk about improvements.

What are some of the biggest challenges Americans face when moving to Germany?

I have spent most of my career in the Middle East, so this is refreshing and comforting, but I have also lived in Germany more in recent years than in the US.

Germany has lots of paperwork requirements, so getting settled for Americans can be hard. But it also offers a great lifestyle, great food and people. And anyone who didn’t grow up riding a bike might have some trouble.

The relationship between the US and Germany has been tested in recent years with the NSA revelations to conflicts in the Middle East and in Ukraine. How would you describe the US-German relationship?

From my position, I would say it has never been stronger. At an official level, out cooperation in the Iran deal was a huge achievement and one that would not have been possible if we were not working together.

On security, as the BKA said, it has saved German lives and American lives. The levels of trade are extraordinary, in the environment, tech and new sectors. The relationship has never been stronger. The Chancellor and Obama speak regularly.

Germany has really been our go-to partner in Europe throughout various challenges.

Regarding TTIP, there have been some major protests in Germany against it – there seems to be a big contingent opposed to the plan. What does that mean in terms of your job, gaining support from the German public?

Support within Germany is lower than anywhere else in Europe, which is surprising because the Mittelstand (middle class) have more to gain than anyone else. It’s based on emotions rather than facts. We want to give people the facts so people can make a more informed decision about the benefits.

In Germany, it’s hard to imagine anyone benefiting more. In general, though, there is resistance to globalization. But the German and Bavarian government and the EU negotiators are big supporters. It’s important that Germans hear about it from them, not just from us, about why it is so important for the German economy.

Hundreds of thousands of people protested against TTIP in Berlin on October 10th. Photo: DPA.

Part of your job is outreach to Germans. What is it that Germans have been most interested in asking about the US recently?

In recent weeks, people have been really interested in our experience with refugees and immigration in the US, which is what Germany has been experiencing over the last months. The refugee influx and finding shelter for everyone is something that the United States has a long history of. We were essentially formed by immigrants, so our experience is something we are getting asked a lot about.

I tell them it’s a process for us. We have done some things well and some things not so well historically, but it’s something we can share.

It is very different. It’s rightly a big debate in Germany, how they want to handle it over time. A lot of people say it’s an economic opportunity given the low birth rates and high number of seniors. But that’s really a discussion for Germans.

Refugees who come to the US have already gone through the United Nations. They arrive and they will or can become citizens in a finite time. What’s happening in Europe is not quite the same. There are many who hope that as the conflict diminishes, that they can return home.

What usually attracts Americans to Germany?

People relocate with their companies and find it’s a great standard of living. I think people don’t like leaving Bavaria – I’m certainly not looking forward to it.

What are some things that Americans could learn from Germans?

We have had absolute respect for how Germany has handled the refugee crisis. It’s not everyday that Germany is on the front page of the New York Times, welcoming refugees as they come in.

Germany has an incredible social support system, but that comes with high taxes. To each country their own, but I think there’s something to be said for a country that places such a premium on taking care of its people.

Also, I would love to see more beer gardens in America. My kids love them. I love them.

There’s a rhythm of life that is different in many ways. I’m not sure if that’s possible to transplant in the United States. I’ll certainly enjoy it while I can.

What advice do you have for Americans thinking about moving to Germany?

Learn German. Embrace it and get out of the cities. Take advantage of all the outdoor offerings. Explore, especially for families.

It works much better when you speak German and when you become a part of the culture. When you do, it’s extremely rewarding.