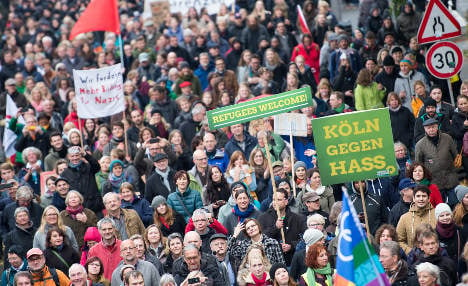 The counter-demonstrators came from a wide range of groupings, from far-left activists to politicians, representatives of local organisations and a Catholic workers' union, the reporter said.

By contrast, between 800 and 1,000 football hooligans and far-right extremists gathered under the banner “Hooligans against Salafists” or HoGeSa.

Some 3,500 officers had been deployed in the city to prevent a repeat of clashes which left 44 riot police injured last year.

On Sunday afternoon, police used a water cannon to disperse far-left activists who had been throwing stones and fireworks at officers.

Around five hooligans were slightly injured when a scuffle broke out with counter-demonstrators at a train station, police said.

And a police officer also received slight cuts when stones were thrown at a patrol car.

Initially, police had sought to get the far-right event banned, but a court on Wednesday ruled that a rally at a fixed location could take place rather than a protest march.

Traffic in the city centre was disrupted, with streets and the Deutz bridge over the Rhine cordoned off.

Tensions are running high in Germany as the country is expecting to host up to one million asylum seekers this year.

In mid-October, a candidate standing for election as Cologne's mayor, Henriette Reker, was stabbed in the neck in an attack apparently over her work with refugees.

A spokesman for the counter-demonstrators said xenophobic ideologies behind movements such as HoGeSa were behind the attack.

At least 4,000 football hooligans and far-right extremists massed under the banner “Hooligans against Salafists” last year in a demonstration that turned violent.

Forty-four riot police were injured when protesters hurled rocks, bottles and firecrackers at them.

This time, the far-right militants were seeking to unite under the motto reminiscent of last year's slogan: “Cologne 2.0 – peaceful and violence-free against Islamist extremists”.