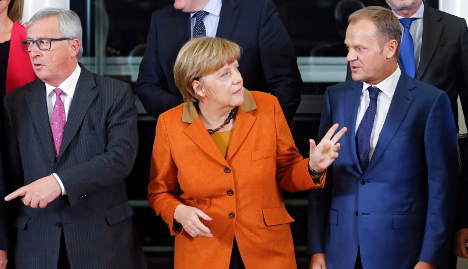 The mini summit, called by European Commission President Jean-Claude Juncker, grouped the heads of 10 EU nations, including Chancellor Angela Merkel, plus the leaders of non-EU Albania, Serbia and Macedonia.

“This is an important opportunity to have them around one table,” European Council President Donald Tusk told reporters in Brussels.

“Today we need a dialogue and talks among Balkan leaders to avoid unnecessary possible misunderstandings and tensions in the whole region.”

Merkel said after the summit that it was an “important meeting” but only “a building block” on the way to a solution.

“We can't completely solve the refugee problem. To do that among other things we need to keep talking to Turkey,” said the German Chancellor.

“I'm not sure that we're going to conclude something that will be very helpful immediately,” Vucic said after a dinner break.

“But I'm sure that at least we understood each other and that we will be ready to take actions jointly in the future,” he said, adding he hoped countries could “overcome all the disputes and all the problems regarding blame games”.

More than 670,000 people have landed on European shores this year – many of them fleeing violence in Syria, Iraq and Afghanistan — in the continent's worst migration crisis since World War II. Some 3,000 people have died making the dangerous Mediterranean sea crossing.

There have been scenes of chaos and suffering as migrants in their thousands make the gruelling journey up from Greek beaches through eastern Europe, heading for Germany and other wealthy northern EU countries.

Fears are rising that the crisis is threatening the cherished “Schengen” system of borderless travel, one of the bedrock achievements of a united Europe.

Faced with a huge influx heading north, Hungary has closed off its borders with Serbia and Croatia.

Tiny Slovenia has now threatened to build border fences if it does not receive help, having become the main entry point to the Schengen zone following Hungary's clampdown.

'We won't be a buffer zone'

“If we do not deliver some immediate and concrete actions on the ground in the next few days and weeks I believe the EU and Europe as a whole will start falling apart,” Slovenian Prime Minister Miro Cerar warned as he arrived for the talks.

Slovenia, which numbers two million people, has been swamped by more than 60,000 migrants in a matter of days.

Cerar called on neighbour Croatia not to continue pushing migrants onward to Slovenia on their way to other countries in the EU.

Juncker had outlined 16 proposals for the talks, according to a draft seen by AFP, including an undertaking that no country will let migrants through to an adjoining state without first getting their neighbour's agreement.

But officials from EU countries have been working to revise the draft amid disagreements over what is the best course.

Bulgaria, Romania and Serbia on Saturday warned they would not accept being turned into a “buffer zone” for the tens of thousands of arrivals streaming into Europe.

“If Germany and Austria and other countries close their borders … we will be ready to also close our borders at that very same moment,” Bulgarian Prime Minister Boyko Borisov said.

With winter looming, Amnesty International on Saturday warned of a humanitarian disaster if migrants are stranded at borders.

Turkey, the starting point for most of the migrants, was absent from the meeting but was on leaders' minds, with officials viewing its help as crucial in stemming the influx to Europe.

The 10 leaders from the 28-nation European Union who are invited to the mini summit are from Austria, Bulgaria, Croatia, Germany, Greece, Hungary, The Netherlands, Romania, Slovenia and Sweden.

An EU source said Greece appears ready to accept a reception camp for 30,000, which is well short of the 50,000 officials were hoping for.

The meeting takes place amid a clear split in the EU over how to best handle the crisis.

Some see it mainly as a border security problem, while others believe it is a humanitarian challenge requiring the bloc to show solidarity and redistribute refugees among them all.

Germany, which expects up to a million migrants this year, saw 4,000 arrive on Saturday in Passau on the border with Austria.