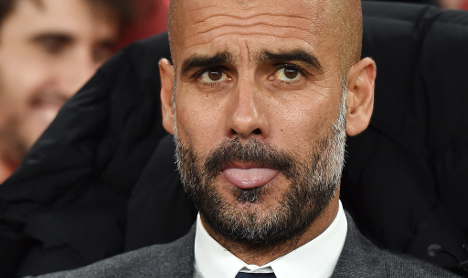 The 44-year-old will be a free agent as of next June, but Bayern's chairman Karl-Heinz Rummenigge has long since said he wants to extend the Spaniard's contract and intends to hold talks to bind Guardiola to the Bavarian giants.

Guardiola has won 19 titles in his career as either coach of Barcelona or Bayern, but has been linked to Premier League clubs Arsenal, Chelsea and Manchester City by reports from the UK media.

Under Guardiola, Bayern have won the Bundesliga at a canter for the last two seasons and are on course to become the first German team to win a fourth straight Bundesliga crown.

A record ten straight wins this season leaves them currently top of the table.

Bayern's captain says he has spoken to Guardiola on behalf of the team, who want him to commit his future to the club.

“Yes, I have informed him of the desire of the team,” said Lahm.

“I won't say what was said, as it was a face-to-face conversation, and should remain an internal matter.

“I don't know why he's hesitating.

“The team's position is clear, we enjoy working with our coach and we really, really want to keep working with him.”

“I hope he stays a long time. He's a great coach,” said the Netherlands captain.

Guardiola has frequently refused to answer questions about his future.

He walked out of a press conference last month after being vexed at questions linking him with the England national team from 2016.