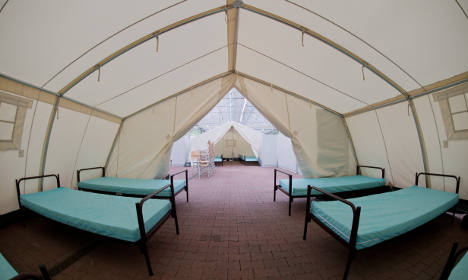 The astonishing number was revealed in a survey of local authorities in the north-west German state by the Neue Osnabrücker Zeitung (NOZ).

Lower Saxony has been instructed by the federal government to supply 4,000 beds for refugees arriving in Germany. But it seems that many are reluctant to stay in the rural province.

Local authorities believe the missing refugees travel on to stay with relatives in Germany or abroad.

But, because many of the refugees have not even been registered by local authorities yet, nothing is known about who they are or where they could have gone.

In one refugee centre in Lingen, the local member of parliament turned up for a visit on Saturday to find that over half of the 212 refugees brought to the centre had already left.

The Federal Ministry for Labour is now estimating that as many as 300,000 of the refugees who arrive in Germany in 2015 will travel on to other countries.

Angelika Jahn, a spokeswoman for the Christian Democratic Union (CDU) in Lower Saxony, described the situation as “unacceptable” telling NOZ that refugees must be registered immediately upon arrival.

But others pointed to failures in the system of housing the refugees.

Timo Frers, spokesman for the town of Delmenhorst, said that the refugees don't know where they are taken after they arrive in Bavaria.

“Most of the time they don't know where they are. We recently put up a map of Germany so they can orientate themselves,” said Frers.

The protesters tried to stop a bus with refugees from driving further down the road by staging a sit-in.

Some people threw apples at the bus, while others set off bangers, the Süddeutsche Zeitung reported.

Around 50 counter-demonstrators also turned up to the anti-refugee sit-in and there were tense verbal stand-offs between the two groups, although police confirmed the situation did not escalate into violence.

Patrick Dahlemann of the Social Democratic Party (SPD) had his car attacked with butyric acid. The foul smelling chemical was poured onto his vehicle.

On his Facebook page Dahlemann said that he would not be intimidated in his efforts to foster a “a real culture of hospitality” in the poor north-eastern state.

Party colleague Susann Wippermann also suffered threats when an unknown person wrote “traitor to the nation” on her car windscreen.

Earlier in October Cologne Mayor Henriette Reker was stabbed while campaigning for election by an assailant with self-declared anti-refugee motives.