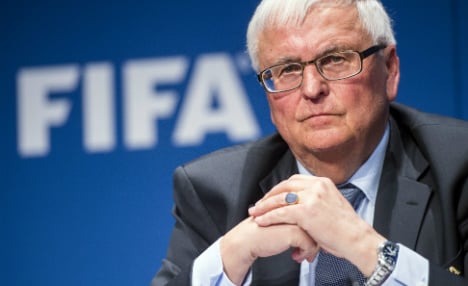 “It is clear that there was a slush fund in the German World Cup bidding process,” he told Spiegel magazine in an interview to be published Saturday.

“It is also clear that the current DFB president knew of this already in 2005, and not only a few weeks ago as he claimed,” added Zwanziger, who headed the German Football Association from 2006 to 2012.

“The way I see it, Niersbach is lying,” he claimed.

German football plunged into a crisis over claims in a Spiegel report last week that the 2006 World Cup bidding committee had accepted a 10.3 million Swiss francs (€6.7 million at that time) loan from former Adidas chief Robert Louis-Dreyfus.

Spiegel alleges that the loan was used to buy the votes of four Asian members of FIFA's 24-strong executive committee. This week, FIFA also revealed that it had investigated Franz Beckenbauer, although it did not specify on what grounds.

Beckenbauer headed the bidding committee for the 2006 tournament, which is still nostalgically referred to in Germany as the “Sommermaerchen” or summer fairy tale.

At a hastily called press conference on Thursday, Niersbach insisted that there had not been anything shady over the 2002 payment.

The money was actually made upfront to FIFA in order to secure a €170 million subsidy from world football's governing body, he said.

Niersbach claimed that in a meeting between Beckenbauer and FIFA chief Sepp Blatter, the German football legend was told the organisation could provide 250 million Swiss francs (then worth approximately €170 million) in subsidies.

He added however that in return “10 million francs must be transferred” to FIFA's finance commission.

“That the financial support of FIFA World Cup Organising Committees should be coupled to any kind of financial advance payment by the respective organising committee or the relevant football association in no way corresponds to FIFA's standard processes and regulations,” said the governing body in a statement.

FIFA also denied receiving any payment worth €6.7 million from Louis-Dreyfus.

Zwanziger claimed that he now knew where the money was destined for.

In the Spiegel interview, he said he was told last week by Horst R. Schmidt, then World Cup organising committee's vice president, that the disgraced former FIFA vice president Mohamed Bin Hammam was the recipient.

Hammam was in 2014 banned for life from football activities, after being found to have bought votes in an election against Blatter.

Meanwhile, the DFB's top management issued a statement saying that Niersbach would lead the organisation in pursuing “a comprehensive, thorough investigation of all allegations relating to the 2006 World Cup”.

Bundesliga president Reinhard Rauball also said that for “the league and for me personally, it is crucial that everything is cleared up completely, regardless of who it involves.”

“It is essential for German football the light is shed on the truth, even if it leads to painful discoveries,” he said.